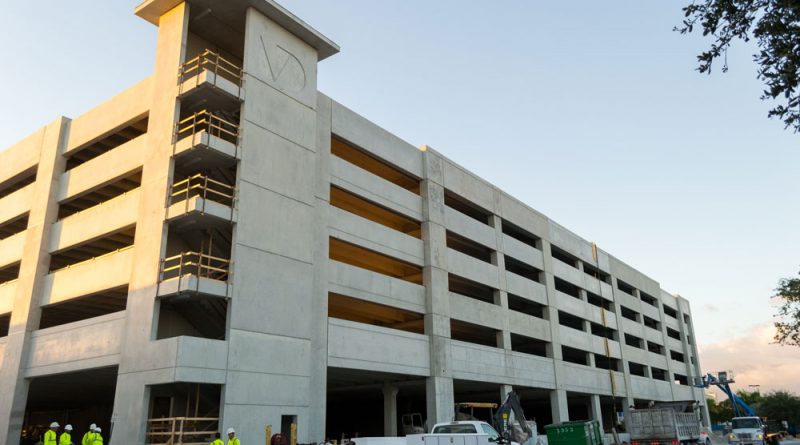 ANTONIO LATTE \ THE REPORTER Finally Finished: The parking garage at the West Campus getting its finishing touches. It is expected to open in the spring semester.
News
December 5, 2016April 2, 2017 Alessandra Pacheco Garage, Parking, West Campus

Next semester, the new parking facility at West Campus will open to students after more than four years of outsourced parking, legal battles and a fatal accident.

“The facility has a brand new, safe structure, a new facility with a new contractor, and a new design,” said Juan Mendieta, Director of Communications for Miami Dade College.

The six-story structure includes 2,026 parking spots, five double-sided rows of parking spaces on each floor and bridges on floors two and three, which connect to building 1, according to Ana DeMahy, executive director of West Campus. It has two exits and entrances to maximize traffic flow.

Officials say the new building does not only aim to solve the ongoing parking issue, but contribute to the expansion of West Campus.

“There is also an open walkway between the two buildings with benches and greenery as we travel between the two spaces,” DeMahy said. “The undercover space will span the length of the building, providing students a locale for exchange of ideas, eating and studying. This space will be equipped with media equipment and capabilities to also serve as a presentation venue or for exhibitors.”

The venue will allow the campus to host guest speakers, presentations and performances.

There is a major sculpture park installation already on the plaza. In spite of the sculptures, in late November, the construction site was a scene of rubble and dust, with workers busy drilling and construction equipment scattered around the area surrounded by a giant blue mesh screen fence.

West Campus has been attempting to fix a shortage of student parking space for the past four years.

At the time, five free 45-passenger shuttle busses transported students from International Mall, where they parked their cars within a portion of the parking lot leased by the College, to MDC-West.

“We have serious parking issues,” DeMahy said to The Reporter in March of 2012.

In January of 2015, West Campus added a new satellite parking location for students at  Doral Central Park, N.W. 33 St. and 91st Ave. Students were taken from the park  to campus via shuttle busses.

Then in August of 2015, the College discontinued using International Mall and  Doral Central Park as parking locations. They then leased the second floor area of the IKEA parking garage, a furniture store located by Dolphin Mall at 1801 N.W. 117th Ave., 20 streets and two avenues from West Campus.  That is where students have been parking since.

Although the parking is free, students complain about the tedious process to get to class which involves parking at IKEA, showing their MDC student IDs, waiting for the yellow school-like buses called Shark Shuttles, riding them and experiencing it all over again when the academic day ends.

The buses run on a continuous loop, with a new bus departing every 10 minutes. But many students don’t find the buses convenient.

“I’ve been late around five times this semester, and it’s come to the point that my computer class professor is lenient with the entire class,” said Yan Coelho, 18, an international relations major at West.

In spite of having her own car, most days, Hurtado’s father drops her off on campus to avoid the parking ordeal. She’s looking forward to the spring semester, but like many of her peers, she is uneasy about parking at the new garage.

“It would definitely be closer and I can get to class faster, but I don’t know if I feel completely safe,” Hurtado said.

The shuttle buses that have transported students to and from class, from different parking locations throughout the years, will stop running on Dec. 18, the last day of fall classes.

The first attempt West Campus made to supply enough parking for the campus resulted in a tragedy that struck the MDC community.

When the construction was three-fourths completed, a pancake collapse of the structure on Oct. 10, 2012 resulted in the death of four construction workers and the injuries of several others.

According to a report filed by the Occupational Safety and Health Administration (OSHA), the collapse was caused after the construction companies neglected to correctly grout the locations of the columns, missed putting welds and failed to closely examine the columns after a crane hit one of the columns two days before the incident.

In a 2012 guest column for The Reporter, José A. Vicente, who was the president of West and North Campuses at the time, expressed his grief when he heard the news of the collapse.

“I was overcome by a whole range of emotions: shock, disbelief, fear, sadness,” Vicente said. “It goes without saying that the loss of human life is the worst tragedy of all.”

Six months later, OSHA penalized Ajax and four other contracting companies working on the site for more than $38,000 in total as a result of multiple inspection flaws and lack of proper oversight.

Court cases were filed by the families of the deceased workers against Ajax Building Corps and the subcontractors, resulting in an undisclosed settlement for the families.

Perez was trapped in the rubble for 17 hours; Budhoo’s body was retrieved from the rubble a week and a day after the collapse. A banner wrapped around a palm tree in front of building 1 at West serves as a makeshift  memorial for Budhoo.

Months later, the College filed a lawsuit in 2013 against Ajax and the subcontractors, that resulted in a settlement of $33.5 million reached in mid May of 2015.

“As part of the settlement, the College received $26.5 million, and the $7 million the school owed the contractors for the garage was waived,” a May 2015 Miami Herald article reported.

Haskell Construction Group, a Jacksonville-based engineer and design firm was hired after the Ajax contract was dissolved.

The dismantling of the old facility began winter of 2014, before new construction started.

The new structure’s construction began on Oct. 6, 2015.  Juan Mendieta, the director of communications for MDC said at the time, that none of the old structure remained and the foundation was rebuilt as well.

However, last April, a beam fell and injured two Haskell employees on an elevated platform at the construction site, setting back the final completion date for the project again. No student, faculty, or staff from the College were injured during the incident.

College officials additional precautions were taken to make ensure another accident does  not occur.

“The difference between this parking garage construction and the previous is that this structure was overseen during the construction and fabrication by multiple third party inspectors,” said MDC Vice Provost Facilities Management Neyda Otero. “And was put together on site, ensuring all elements were welded and secured as per manufacturer’s specification as it was being completed section by section.”

In spite of the setbacks, some students remain optimistic.

“With the new parking garage, now I can leave my house later, then I can just park and go directly to class,” said Nelson Gallegos student of English for Academic Purposes at West. “My car is an old car so I don’t care if the garage collapses again because I can get a settlement and just get a newer model.”

College officials said they do not plan to have a ribbon-cutting ceremony to open the new parking garage. 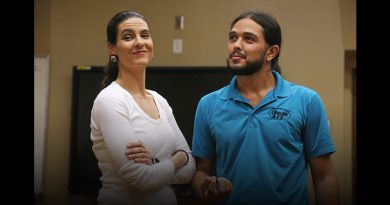