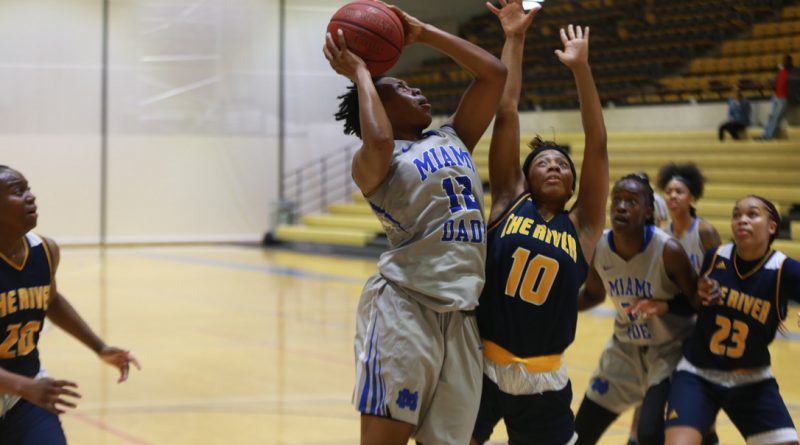 Leading The Way: Sophomore combo-guard Daliyah Brown is leading the nation in scoring with 26.4 points per game. She is also averaging a team-leading 7.7 assists per game for the 10-6 Lady Sharks.
REPORTER FILE PHOTO/ CHRISTIAN ORTEGA
News Sports
January 10, 2020 Alina Halley

Daliyah Brown has been the Lady Sharks’ leading woman this season.

As a sophomore, she leads the nation in scoring with 26.4 points per game to go with 7.7 assists. The 5-foot-9-inch combo guard has scored in double digits in 15 of the 16 games so far in the season— with a season-high of 40 points versus Florida State College at Jacksonville on Nov.16.

However, basketball didn’t always come naturally to Brown, but with a lot of persistence from her father, Derrek Brown, she was able to evolve into the player she is today.

Brown grew up in Maywood, Illinois. She learned to play basketball on the court of her town’s recreational center when she was in sixth grade.

“Honestly as a kid I always liked basketball but I was never into the idea of playing,” Brown said. “I actually got bullied a lot when I first started because I really couldn’t play. I wanted to give up a lot.”

But her dad wouldn’t let Brown give up. He took her to any court that had a rim and practiced with her.

“He saw something I didn’t, a deeper vision,” Brown said. “And from that point on he pushed me and practiced with me seven days a week until I became better than the bullies I cried to him about.”

Brown went on to star at Proviso East High School. During her senior campaign, she averaged 19.2 points, six rebounds, six assists and three steals per game. Brown was selected as the team’s Most Valuable Player that year and was ranked the 26th best player in the state.

After graduation, Brown brought her talent to Miami Dade College.

During her freshman year, she was appointed captain of the Lady Sharks basketball team and aided them in clinching the Southern Conference title. However, the Lady Sharks fell to Florida Northwest State College 77-57 in the first round of the Florida College System Activities Association State Tournament.

Brown, who aspires to play professional basketball abroad, continued to work on her game this past offseason, but she considers her biggest improvement to be her positivity and her leadership qualities.

“I wouldn’t talk much last year on the court. I kind of had an attitude at the beginning of the year,” Brown said. “When I was doing good I would talk, but once I started doing bad you couldn’t talk to me. Now I try to go into a healthy mind[set] before every game.”

Her goal this season is to lead the Lady Sharks, who are currently 10-6, to the state tournament and nationals.  Brown’s teammates are confident she can take them there.

“She’s not just a great player but also a great person,” said point guard Rio Yamazaki. “That’s why everybody on this team trusts her and follows her lead.”

The Lady Sharks’ next game is on the road versus DME Sports Academy in Daytona Beach on  Jan. 15 at 5:30 p.m.