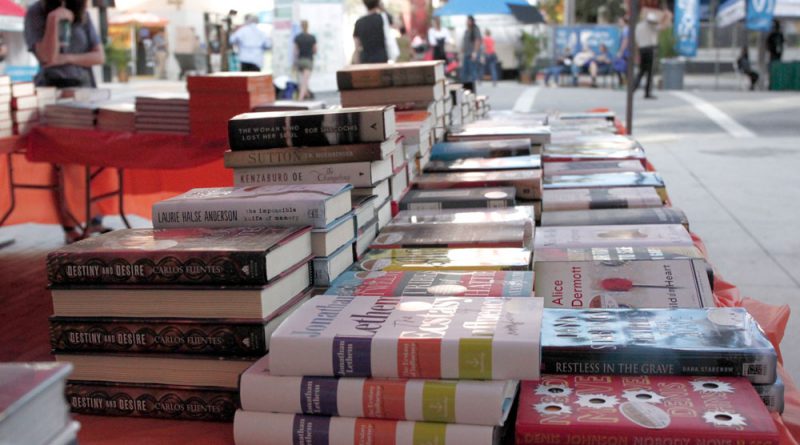 The Books Are Here: The 36th annual Miami Book Fair will take place in downtown Miami from Nov. 17 to 24. Hundreds of attendees will get the opportunity to rub elbows with world-renowned authors at the eight-day literary event.
REPORTER FILE PHOTO / HECTOR D. GONZALEZ
News
November 1, 2019November 2, 2019 Alexander Gomez

A legendary rockstar, a former member of the Sandinista revolution and several National Book Award winners are among those participating in the 36th annual Miami Book Fair.

They join hundreds of renowned authors, performers and musicians at Miami Dade College’s week-long literary festival that takes place in downtown Miami from Nov. 17 to 24.

“The purpose of Miami Book Fair is to celebrate books and writers,” said Lissette Mendez, director of programs at Miami Book Fair. “To put books into the hands of as many people as possible, and to further the cultural enrichment of our community.”

The Book Fair kickstarts its week-long programming with a paella party presented by The Paella King on Nov. 17 at 5 p.m. on the first floor of building one at Wolfson Campus, 315 N.E. 2nd Ave. The event will include a gigantic Spanish paella with performances by the French Horn Collective, a Parisian ensemble.

Highlights for the Evenings With author series include: Debbie Harry, former lead singer of the now-defunct ‘80s new wave band Blondie, political talk show host and commentator Joy-Ann Reid and Gioconda Belli, a Nicaraguan author who played an integral role in the Sandinista movement in the ‘80s.

Belli will talk about her latest novel, The Country Under My Skin, her involvement in the socialist movement, her eventual parting with the group and thoughts on the current state of Nicaragua on Nov. 17 at 4 p.m. in Room 1261.

Reid, who hosts MSNBC’s weekend talk show AM Joy, will discuss her novel The Man Who Sold America: Trump and the Unraveling of the American Story on Nov. 17 at 7 p.m. In the book she discusses the impact of Donald J. Trump’s presidency on American politics and society. Reid previously wrote two novels—Fracture: Barack Obama, the Clintons, and the Racial Divide and We Are the Change We Seek: The Speeches of Barack Obama—that provide an in-depth analysis of U.S politics.

Another staple event of the Book Fair is The Porch, a gathering that brings together live music, art, film and comedy routines. It starts with a community coloring wall presented by the The Wynwood Coloring Book, a silent poetry disco courtesy of the Academy of American Poets and performances from Latin Grammy-nominated DJ Mr. Pauer.

Literary buffs can also compete for the title of Laureate-Luchador at the Lucha Libro event. A twist on Mexican pro-wrestling, competitors are given five minutes to speed through three short writing prompts while wearing traditional luchador masks. Winners will be invited to participate in a creative writing class next year for free. Writers must submit a flash-fiction story to Koubek Center manager Melissa Messulam at mmessu1@mdc.edu by Nov. 8 to be eligible.

The popular Street Fair takes place Nov. 22-24 from 10 a.m. to 6 p.m. Anyone that purchases a ticket can roam the area in front of Wolfson Campus along Northeast Second Avenue and beyond and see a plethora of the Book Fair’s signature colorful tents housing vendors hawking literary books, graphic novels, comic books, and novellas.

Tickets for the Street Fair are free for Miami Dade College students, faculty and staff with a valid ID.