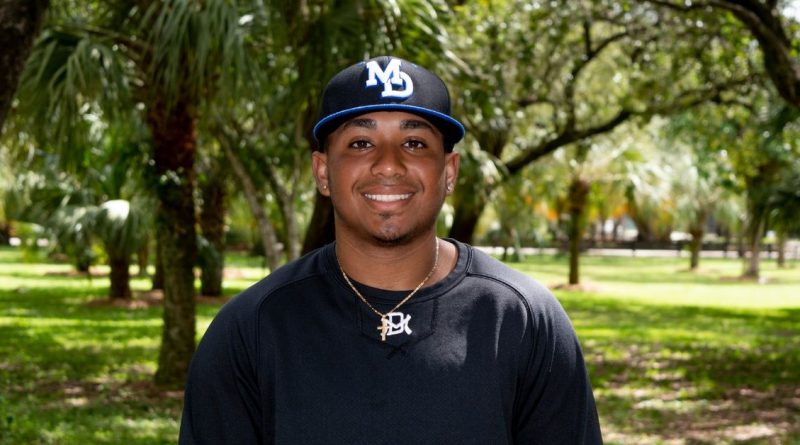 Comeback Kid: Bryan Sanjurjo sat out last baseball season after being diagnosed with stage II liposarcoma, a rare type of cancer that develops in fatty tissue. He is making a return to the team this year. DAVID BATISTA / THE REPORTER
Sports
September 25, 2020October 8, 2020 Jose Tovar Baseball, Cancer, comeback

Bryan Sanjurjo sat pensively in a room at the Sylvester Comprehensive Cancer Center as he awaited the diagnosis of a baseball-sized lump that had formed under his left armpit.

Sanjurjo doesn’t remember much about that day in September of 2019, but the news he got, crushed him like a Gerrit Cole fastball to the face.

Test results determined that he had stage II liposarcoma, a rare type of cancer that develops in fatty tissue.

His left arm, the one he had used to catch baseballs since he was four years old, might have to be amputated too, they said.

“I felt devastated,” said Sanjurjo, who had completed his freshman baseball season at Miami Dade College before cancer interrupted his life.

Sanjurjo is back on the baseball field at Miami Dade College fighting for a roster spot on the Sharks’ baseball team. His left arm survived as well.

“I think he’s only gonna be better,” said Sharks Head Baseball Coach Adrian Morales, who was an assistant coach on the team, when Sanjurjo was a freshman. “He’s gonna be stronger mentally. He’s gonna get stronger physically. I expect him to be what he was after his freshman year—a notch better.”

Sanjurjo was born in San Juan, Puerto Rico on Feb. 22, 2000. When he was four, his father, Neftali Sanjurjo, encouraged him to play little league baseball for the Legends de Juncos. He attended high school at the Carlos Beltran Baseball Academy in a small town in northern Puerto Rico.

In 2016, he noticed a small ball of fat growing under his left armpit. After getting an MRI during an annual medical checkup, doctors said it was lipoma—a benign tumor of fatty tissue that forms below the skin—and it didn’t require surgery.

“It was brought to our attention because it looked odd,” Neftali recalled. “We checked it annually.”

Trusting the initial diagnosis, Sanjurjo continued his life as usual.

In August of 2018, he received a scholarship to play at MDC. As a freshman, he batted .284 and had 20 RBI while playing shortstop and outfield in 32 games.

Despite his success that year, Sanjurjo played with discomfort. The lump that had formed under his left armpit when he was 16 years old was growing. That summer he returned to Puerto Rico to have it removed.

He visited multiple doctors in San Juan, who ordered CT scans and MRIs to determine the reason behind the growth. Doctors discussed the possibility that Sanjurjo had liposarcoma, but results came back inconclusive.

“We went to like four different doctors because there were no specialists in Puerto Rico,” Neftali said. “One of the doctors advised us to go to the United States for [Bryan’s] well-being.”

Running out of options, Sanjurjo’s parents took him back to Miami to meet with Dr. Jonathan Trent, a sarcoma specialist at the University of Miami Healthcare System’s SCCC.

A biopsy confirmed what they dreaded—it was cancer.

On Oct. 18—the same day as his father’s birthday—Sanjurjo started chemotherapy sessions with Dr. Trent. The original plan was to complete four sessions that lasted from Monday through Friday every three weeks. However, after the tumor didn’t shrink much, they added two more sessions.

The procedures took a toll on Sanjurjo. He vomited often, suffered persistent stomach aches, and lost his hair and 14 pounds.

“I didn’t feel like myself,” Sanjurjo said. “I felt lazy. I didn’t want to do anything.”

But he never felt alone.

Sanjurjo’s parents and his grandmother, Maria Luisa Quiñones, took turns traveling to Miami to be by his side. His father often left Miami at 5 a.m. on flights to Puerto Rico so he could get to his job as a salesman for Menaco Corporation, a cleaning products company, by 9 a.m.

When he felt better, Sanjurjo attended some of the Sharks’ practices and games. On other occasions, he spent days with his former roommates, Juan Marcano and Ediel Freytes-Pantoja, playing Playstation 4 and watching National Basketball Association and Major League Baseball games on TV.

“We didn’t try to talk about what he had,” Marcano said. “We talked about other things. I think that helped him a lot.”

Sanjurjo completed chemotherapy in late February, weeks before the COVID-19 outbreak shut things down in Miami. Three months later, he underwent a four-hour surgery at SCCC to remove most of the tumor. Doctors left parts of the tumor untouched to avoid major complications like mobility and sensibility loss. He needed radiotherapy to eradicate the remnants.

In July, he underwent the first of 30 radiotherapy sessions in Puerto Rico. A month later, he finished his last radiotherapy and his cancer was in remission.

“He never lost his focus,” Moreno said. “If I had to use one word to describe him, it would be consistency.”

The hard work and commitment paid off.

Two months after the surgery, Sanjurjo regained 12 of the 14 pounds he had lost. On Sep. 15, sporting a five-inch scar that stretches from his chest to his left armpit and a newfound appreciation for life, he took batting practice for the first time since he was diagnosed with cancer.

“It’s a part of my life that’s behind me,” Sanjurjo said while recounting what he had been through this past year. “I feel proud because I was able to beat it. It’s a story I’m going to be able to tell.” 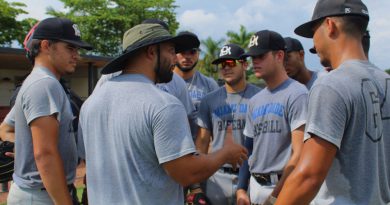