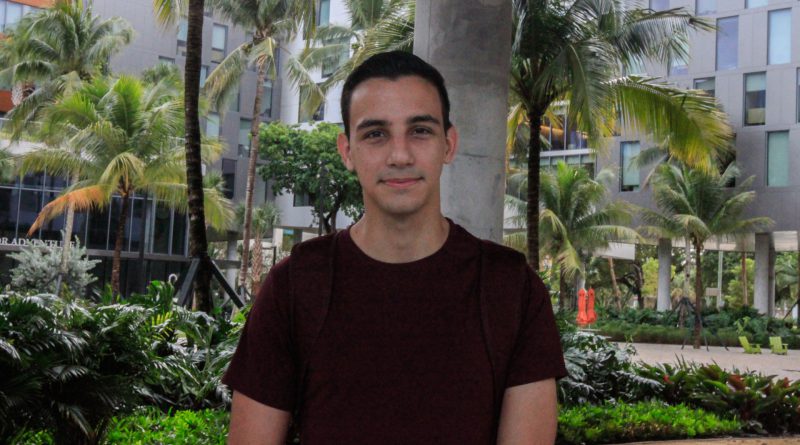 Like most 10-year-olds, Nelson Hidalgo enjoyed his PlayStation. But it wasn’t gaming that interested him the most—it was opening the console and fixing issues it encountered that captivated him.

Today, the 20-year-old biomedical engineering student at the Massachusetts Institute of Technology is using his interest in technology, engineering, and science to create an orthopedic robotic device—an exoskeleton arm—to help paralysis patients

“I noticed that there aren’t many products in the market that can help patients who suffer from paralysis,” Hidalgo said. “So we started researching and designing the product to find the technology that could be used for the purpose of helping the patient.”

In September of 2015, he moved to Miami looking for opportunities to better his life. As a sophomore, he enrolled at Miami Springs Senior High School.

“I became very focused when I came to America. When I got here, my math skills were very poor. So I went to Khan Academy and watched every math video that I found to learn the concepts that I wasn’t taught in Cuba, ” Hidalgo said. “I have the mindset that perfectly fits in the culture of pursuing the American Dream.”

Hidalgo augmented that learning by working as a research assistant at the University of Miami’s Neural Interface Lab this past summer. He assisted with research about signal processing and paralyzed patients through the Bridge to the Baccalaureate program, a project that funds research opportunities for MDC students.

That is when he noticed that devices to help stroke patients weren’t widely available and thought about creating a more accessible option.

“The idea came from talking to the patients and noticing that the patients who suffered from paralysis did not have the products in the market to help them be mobile on an everyday basis,” Hidalgo said.

But he didn’t have the resources or funding at the time to go through with his vision. That would soon change.

After being awarded the Jack Kent Cooke Undergraduate Transfer Scholarship—a $40,000 scholarship—and graduating from MDC this summer, Hidalgo transferred to MIT in Cambridge, Massachusetts, and joined MIT Sandbox—a program that provides up to $25,000 in funding and mentoring for student-initiated entrepreneurship ideas.

The program gave Hidalgo $1,000 dollars for early-stage funding, which he will use to do market research about patient needs, commercialize his idea and fundraise more money to build the product. It will help him build a business model and search for investors in the biomedical field.

Hidalgo soon created a team to help him with the project. The goal is to build a mechanically operated arm brace that helps patients move their arms when they suffer from paralysis or have an injury that restricts movement.

“As of now, the device focuses on helping patients who have upper paralysis,” Hidalgo said. “The hand is one of the parts of our body that we use the most in our everyday lives so that is kind of the reasoning that is our focus right now.”

The team, which met at MDC before Hidalgo moved to MIT, consists of: Karl Julius Mueller, who leads the business model development; Manuel Faria, who assists in primary market research and explore tech; Linus Gartig, who assists in the digital publications and does the graphic design, Christian Claro, who focuses on material engineering; and Hidalgo, who develops the prototype, recruits the MIT engineers and computer scientists.

They hope to have the product finalized within the next three years.

“We are still in the early stages but it is a fruitful beginning,” said Mueller, a 20-year-old biology student in the Honors College at Kendall Campus. “I want to get our first clinical trials done soon, but before that, we want to know where exactly we need the attachment of the arm, the angles, and how it can be attached. There are many things that this arm still needs that we are working on. But we plan to get together with a clinic that can help us make our dreams become a [reality].”