After multiple surgeries due to degenerative cartilage in both knees derailed her basketball career at Marquette University in Milwaukee, JeTaun Rouse is attempting a comeback at Miami Dade College.

Rouse, who was once one of the most coveted high school guards in the country, brings an aggressive, fast paced style to the Lady Sharks.

“Every day for her is game day and because of that passion, positive energy and courage she will no doubt outweigh any of the possible negatives that most ordinary players may experience that lack the fierce passion and positive attitude,” said MDC Head Women’s Basketball Coach Susan Summons.

She left Marist High School in Chicago with a boatload of accolades. Rouse averaged 21.7 points per game her senior year, and was ranked as a top-45 guard on ESPN’s National Top 100 High School Women’s Basketball Players List. Her prolific scoring allowed her to leave the school as the team’s all-time leading scorer, amassing more than 2,000 points in her career.

That got the attention of Division I school, Marquette University. It was at Marquette that Rouse’s knee issues surfaced.

“It was actually our first official practice when I hurt my knee, and after that, everything just went downhill,” Rouse said.

The official diagnosis was that the cartilage in her right knee had been mostly missing, due to degenerative cartilage, causing friction between her bones and resulting in knee problems. The injury forced Rouse to be redshirted her freshman year.

Then things continued to spiral downward. Soon, the same knee complications would occur in her other knee, and both knees would eventually require several surgeries to repair the damage.

“I was in a depression,” Rouse said. “[I] messed up my grades just because I had basketball taken away from me.”

Rouse, 21, was given her shot at redemption when her seventh grade Amateur Athletic Union coach, Marc Irvin, put her in contact with MDC Head Women’s Basketball Coach Susan Summons.

“[Summons] took me in when no one else would,” Rouse said. “She gave me the second chance that I had been asking for and praying for, and she just accepted me with open arms. She cares about me as a person before [she cares about me] as a player, and I really like that.”

With the season starting in November, Rouse is doing everything possible to give her knees the best treatment possible. Her regular regiment ranges from constantly putting ice on her knees, to stretching and working with MDC’s strength and conditioning coach, Phillip Glatzer on exercises that strengthen her quad muscles and other areas of her legs.

Despite the precarious state of her knees, Rouse intends to play hard and play as much as possible this season. Her goal this year is to average 40 minutes per game.

“I just want to let [NCAA DI coaches] know that I’m still working hard, and I haven’t given up,” Rouse said.

The Lady Sharks play their regular season opener on  Nov. 3 at 5:30 p.m. on the road versus Hillsborough Community College. 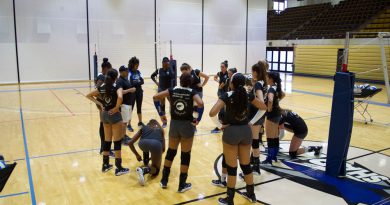 Lady Sharks Volleyball Team Off To Another Good Start