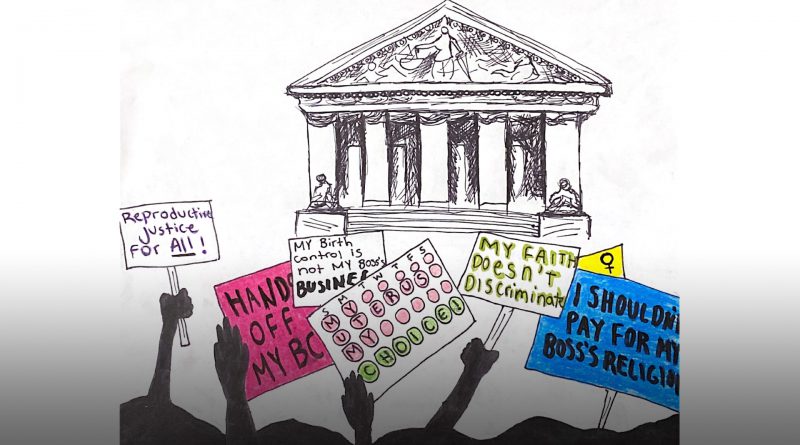 Birth control is a vital aspect of sexual health and the overall wellness of many women.

But, many politicians in the United States and companies don’t think so. In fact, the Supreme Court upheld the Trump administration’s regulation that allows employers to opt out of birth control coverage if they have religious or moral objections to it under the Affordable Care Act.

The ruling could force as many as 126,000 women to lose contraceptive coverage from their employers, according to The New York Times.

In 2010, the Obama administration passed the Affordable Care Act, which said employers must offer birth control with no copay in their health insurance plans.

Our male-dominated government makes it hard for women to have reproductive autonomy on their bodies. Removing this benefit will give the men in charge more power to limit these rights.

Why is it that, when women are not ready to have a child, they are forced to either have the child or resort to expensive and sometimes illegal abortion methods?

Condoms are not enough to prevent unwanted pregnancies and many women choose to have sex.

Limiting birth control options isn’t going to prevent people from having sex, but it will make it less safe.

Many politicians and religious people love to preach their pro-life opinions. But their actions go against their own beliefs. Want less abortions? Then make birth control more accessible.

It also hurts many of those that work for religious institutions, like hospitals and universities.

Nearly 800,000 people that work for Catholic hospitals would stand to lose birth control coverage under these new guidelines, according to Planned Parenthood.

“Taking away the benefit of copay-free birth control coverage would affect all people who need birth control — including Catholics and non-Catholics,” the article reads.

So removing this benefit isn’t a matter of religious freedom. If the Trump administration wanted to protect expression of religious beliefs without negatively punishing or restricting women in America, they could undoubtedly do so.

With the amount of resources available and funding the administration can provide for women in need of birth control, it would show this is not about taking away women’s health care.

Sex discrimination is also a big reason why birth control is condemned.

Some argue that to avoid running into this issue, women should avoid working for employers that are against birth control. But not every woman has the option of switching jobs whenever they run into this situation.

Government leaders and some companies need to rethink their decision to take away our fundamental rights. Why should we be denied free health care because your religion says so?

Everyone deserves healthcare that is free of judgement. It’s nobody’s right to govern our bodies. Keep your religion out of our uterus.

Avoid Loans And Your Future Will Thank You