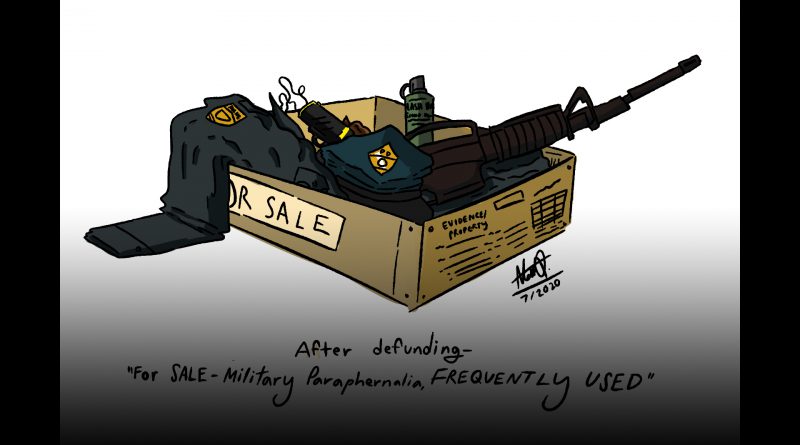 It seems like everytime we turn on the television or scroll through social media, there’s another horrific headline about someone being killed by a police officer in the United States.

That has fueled a bevy of protests throughout the last month and a half. Among the demands: justice for the murders of George Floyd and Breonna Taylor—both of whom were killed by police.

The injustice has also led millennials and Generation Z to call for the defunding of police departments across the nation. The movement has spread like wildfire on social media platforms like Twitter, Instagram and Tik Tok.

But, many people think defunding law enforcement means getting rid of it altogether, but that’s not the case.

Defunding the police means reducing their obscenely high operating budgets, and redistributing the money into low-funded sectors of the local community like education, public transportation and social service programs.

While there are organizations that want to disband police departments, they are on the radical side of the movement. They are nevertheless based on the notion that communities need to gradually move away from police and reinvest into community-based programs, according to CNN.

Police work is important, but many officers abuse their badges.

Many schools can’t afford theater or art programs and some teachers buy their own school supplies, yet police never have to worry about essential supplies and have access to military-grade equipment like rubber bullets and tear gas.

The problem fuels the school-to-prison pipeline dilemma—which occurs when harsh punishments from schools and local governments lead to students in prison. In particular, Black students are three times more likely to be disciplined than their white peers, according to the U.S. Department of Education Office for Civil Rights.

School police and regular police are often called to de-escalate situations when students act out. When I attended Jorge Mas Canosa Middle School, I saw an 11-year-old boy be escorted out in handcuffs by police after he got into a fight.

Instead of relying so much on police, local communities should pay attention to social service programs aimed at helping inner city kids build their lives and escape crime.

However, conversative politicians use the movement as a way to label protestors as extremists that want to abolish the police. President Donald Trump even used the term in a recent election advertisement to attack his Democratic opponent Joe Biden.

“You have reached the 911 police emergency line. Due to defunding of the police department, we’re sorry, but no one is here to take your call,” says an answering machine operator that narrates the video, as it displays scenes of looters breaking into storefronts and protestors carrying signs that read “defund the police.”

These ads are scare-tactics that are false and hurtful to the movement.

But the demand for change has worked. Many cities have taken active steps to redistribute taxpayers’ dollars, including Philadelphia, Minneapolis, Hartford, San Diego and more, according to Axios.

Our communities need to work together and demand that local officials follow that trend too.