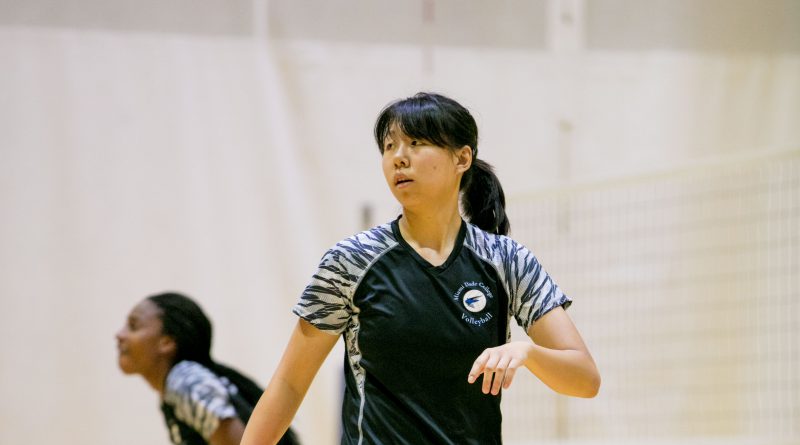 During a tournament in 2016, an energetic outside hitter from China caught the eye of Miami Dade College head volleyball coach Origenes ‘Kiko’ Benoit.

Benoit, the charismatic leader of the Lady Sharks volleyball program,  approached Sun Wenting’s coach with the gusto of a spiked volleyball to express interest in the 5-foot-11 inch frontline specialist.

The enthusiastic inquiry paid dividends for Benoit. Wenting is one of the top players for the Lady Sharks, who have started the season 8-0 as they defend the team’s national championship.

“On the field she’s a leader,” Benoit said. “She’s those type of players that keep the group together. She works very hard. She’s what we call a team player.”

The 20-year-old sophomore was a crucial member of last season’s Lady Sharks squad. She racked up an impressive 264 kills, averaging 3.47 kills per set.

During the 2016 Florida College System Activities Association State Tournament, Wenting was a force to be reckoned with. She piled up 21 kills in the championship game versus Santa Fe College on Nov. 6 and was named to the 2016 FCSAA All-Tournament Team.

Other accolades from last season include being named to the 2016 All-Southern Conference First Team and the 2016 Division I Volleyball National All-Tournament Team.

Wenting’s love for sports was born at a young age in her hometown of Qiqihar, China. Athletics was a connection that unified her and her dad, Fengguo Sun.

“My father likes to watch sports games,” Wenting said. “We always stay together and watch the games. I got interested about sports.”

But volleyball eventually won her heart. For the past 10 years, Wenting has dedicated herself to the sport.

This season, Wenting, who is working toward a degree in sports psychology, is again proving to be at the top of her game. She has the second highest average of serving aces per set on the team (0.21) and she’s also one of the leading players in kills (59) and kills per set (3.11).

After MDC, Wenting hopes to continue her studies at the University of Missouri and eventually become a volleyball coach.