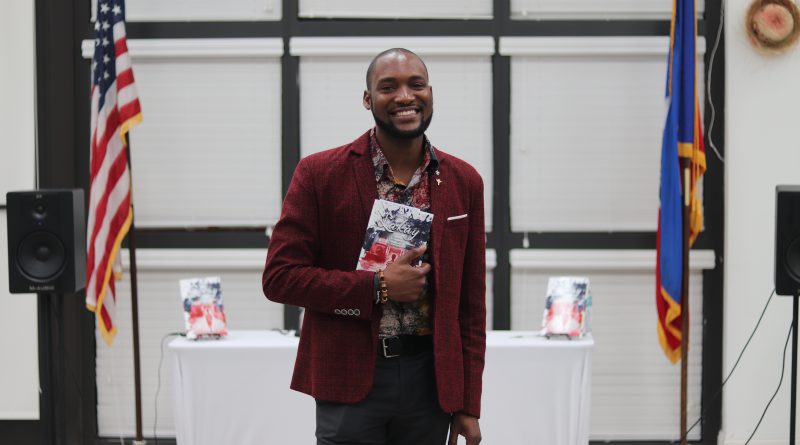 Frederick’s 186-page memoir was released on Oct. 24. The 27-year-old, who came to the United States when he was 18, began writing the book two years ago.

Frederick says the title, Lakay, which means ‘home’ in English, was chosen to help readers find “hope in hopeless situations.”

In the memoir, readers can find Frederick’s vivid descriptions of his childhood in St. Marc, his explanation of historical events like the massacre of de la scierie, his transition to the United States, his participation in the Trail of Dreams while at MDC and why he wants people to come together.  Bible verses, photos and a forward by Year Up CEO  and Founder Gerald Chertavian are also included.

“David’s story is an important one: it shows the immense talent, creativity, and passion shared by young adults across this country,” Chertavian said. “I felt proud as I read through the book, getting a deeper insight into the challenges David has overcome and the accomplishments he has celebrated.”

On his iPhone, Frederick has hundreds of notes, ranging from full chapters to sentences, which he has written during slow times at his full-time job as an AT&T retail consultant.

“If I’m not doing much, I just pick up my phone and start putting notes and I just love it,” Frederick said. “When I go home, [I] transcribe the notes to the book, the computer,  and just check everything in paragraphs.”

Chapter five, Trail of Dreams, and chapter seven, The Audacity of Faith, in Lakay relied heavily on his old journal entries.

“I wanted to put in the book what I felt at that time and I could only do that by going through and re-reading the journals,” Frederick said. “Not just thinking of what happened, but really writing what it is.”

He does this when his family is asleep, but his wife Elpidia Frederick teases him about his constant phone use and the lack of sleep he gets.

The couple, who have been married for three years, lives in a four-bedroom home in North Miami Beach with their two-year-old son Davheed Jasper Frederick. They are expecting their second son soon.

Frederick moved to the United States more than nine years ago. He started work on his associates in arts degree in international relations in 2009 at Wolfson Campus. Frederick graduated from the College in 2013 and is now a part-time student at Florida International University, working toward a bachelor’s degree in international relations. He is also founder and host of Impact The Outcome, a podcast about Haiti’s history and tourism.

At the College, he was president of Minority Students For College Success, where students can receive tutoring services and listen to speakers, and MDC Wesley, a Christian club.  He was also a member of Year Up, a program that helps disadvantaged students learn work skills and intern at companies.

He arrived in the United States in July of 2008 on a visa but overstayed his visit hoping to get political asylum. In 2010, Fredrick received Temporary Protective Status after a 7.0 magnitude earthquake struck Haiti. He became a resident of United States after marrying his wife in June of 2014 but has never forgotten the state of being “in a limbo” undocumented students face.

Frederick was devastated by the Trump Administration’s decision to terminate TPS for Haitians on Nov. 20. More than 50,000 people under the program need to leave the United States by July 2019—or they will face deportation.

“We need to push and find a way for Congress to realize, okay these people and Haiti is not ready,” he said.

Frederick is determined to keep pushing forward. He began filming his documentary series Window To Haiti, where he displays the food, history, and residents of cities like Jacmel, Jérémie, Port Au Prince, and St. Marc.

“It’s to really show Haiti in a way that’s never been seen before,” Frederick said.

An episode has already been filmed in Jacmel. He plans to release the show in April 2018. Frederick hopes to have the series available on National Geographic, PBS, Netflix, or NBC.

Frederick hopes his entrepreneurship galvanizes others to do better.

Lakay is available for purchase online at Amazon, Barnes and Noble, Friesen Press and Frederick’s website www.davidfrederick.net/. He plans to start a book tour in February and visit cities like Philadelphia and Boston.

MDC Alumni Awarded For Excellence In Theatrical Design And Technology