In 2014, there were 11.3 million undocumented immigrants residing in the United States, according to the Pew Research Center.

Earlier this year, Missouri and Arizona changed and passed laws that prevent undocumented students from receiving in-state tuition at the college or university they attend. Even if the students live in the state that their university or college is located, they are forced to either pay out-of-state tuition or international student rates. In the state of Georgia, undocumented students are banned enrollment in public universities.

Students in this situation may be a step behind when it comes to resources that will benefit them in school, but that does not mean they aren’t high performers. They are provided free schooling until grade 12 and some go on to graduate high school with honors, though their future is uncertain when it comes to college or university.

In 2010, the DREAM Act (Development, Relief, and Education for Alien Minors), a multi-phase legislative proposal that would’ve granted permanent residency to undocumented students, failed with a final vote of 55-41 in the Senate.

After the failure of the DREAM Act, President Barack Obama announced that the U.S. Department of Homeland Security would not deport certain undocumented youth who came to the U.S. as children.

The executive program was titled DACA (Deferred Action for Childhood Arrivals). Students eligible for the program must have been living in the U.S. since June 15, 2007, come to the U.S. before the age of 16, graduated from high school or obtained a GED, have not been convicted of a felony, and must not have posed a threat to national security. DACA is a two-year temporary solution for undocumented students, providing them with a social security number and work permit.

DACA is a clear example of how undocumented students, if given the opportunity, can contribute to the economy.

In some states, undocumented students are still forced to pay out-state fees which can be three times the cost that a legal resident pays.

Out-of-state tuition fees and the lack of federal funding prevents many undocumented students from attending college. They should be allowed to receive in-state tuition and receive the same scholarship opportunities as their counterparts.

Passing the federal DREAM Act would’ve added a total of $329 billion to the U.S. economy by 2030, according to the Center for American Progress. Passing the law would help these individuals work legally and utilize their skills and education.

Many of those students have lived in the U.S. their whole lives — wanting to give back to the communities that nurtured them. Grant them the opportunity to obtain an affordable education and gain legal status. Because at the end of the day there is no difference between the performance of undocumented students and legal residents when it comes to their education.

To What Extent Does DACA Offer Legal Status?

March 31, 2017 David Rivas Comments Off on To What Extent Does DACA Offer Legal Status?

For Students With Deferred Action Status, Optimism And Frustration

February 18, 2014 Guillermo Herrera Comments Off on For Students With Deferred Action Status, Optimism And Frustration 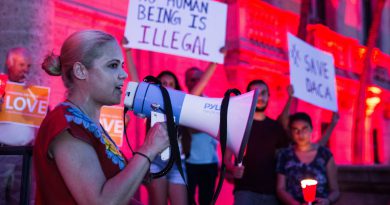