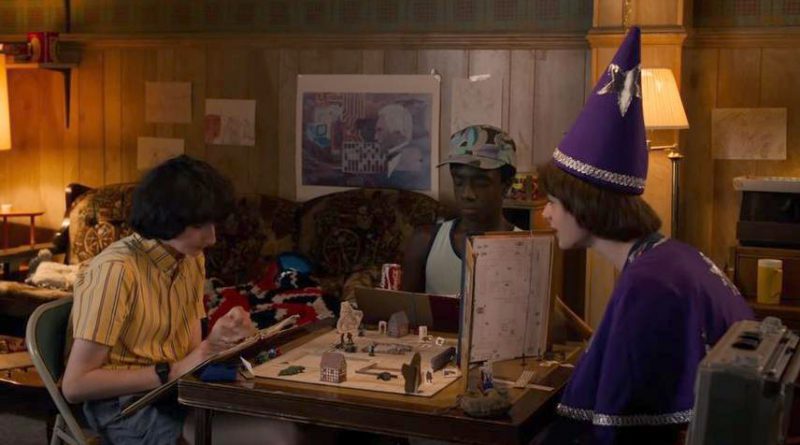 Relevance: With a resurgence in shows like Stranger Things and The Big Bang Theory, Dungeons & Dragons has broken into the mainstream again.
PHOTO COURTESY OF NETFLIX
A&E
November 1, 2019 Ethan Toth

The years have long passed since “Satanic panic,” the gripping fear of Satanism corrupting the youth and secular organizations of America throughout the ‘70s, ‘80s and ‘90s. Many aspects of popular culture were attributed to worshipping the Devil like Halloween, heavy metal music and the then-newly created, Dungeons & Dragons.

The tabletop fantasy roleplaying game had its beginnings in 1974 and has endured the test of time. With a player base of those who fairly enjoy nerd culture, it isn’t surprising to see the game appear in television shows where the characters are a bit nerdy themselves. Recent shows such as Stranger Things, The Big Bang Theory, Gravity Falls and Community all have referenced or included the game in some fashion; either mentioning it in passing or including the iconic character sheets or combat grid, essential materials for playing. Even the horror-themed drag competition, Dragulam, has had a D&D-themed episode in its latest season. It’s safe to say that shows are more comfortable with implementing this material since there has been a rise in the game’s popularity and it’s become a known reference.

Putting references aside, there has been Dungeons & Dragons content in the past and even looking forward. Running from 1983 to 1985 on CBS, the Dungeons & Dragons animated series was most likely a starting point for people’s interest in the franchise.

Skipping forward to 2000, a Dungeons & Dragons film was released to incredibly negative reviews, with the major negatives being the poor production value and special effects. Surprisingly it received two sequels, one made for television and one straight-to-DVD; released in 2005 and 2012, respectively. It wouldn’t be until three years later that plans for a reboot to the franchise were announced, currently under production by Hasbro, Paramount Productions and Vertigo Entertainment.

The film has a Nov. 21, 2021 release date and has some big names currently attached.  John Francis Daley and Jonathan Goldstein, directors of Game Night and Vacation are in talks to direct; David Leslie Johnson-McGoldrick of Aquaman and The Conjuring fame provided the first draft of the script and was rewritten by indie writer Michael Gilio. The film is currently undergoing casting and was reportedly looking for a leading A-List star to headline the film. This could include anyone from Chris Pratt to Vin Diesel. The latter has also dipped his toe into the D&D community before.

Along with Diesel, many other actors and famous personalities have thrown their hat into the arena. Actor Joe Manganiello, who championed the 2021 film, has been a fan of the franchise as well. Some other fans include Stephen Colbert, Anderson Cooper, Elon Musk, Kevin Smith, Patton Oswalt and even current Democratic presidential candidate Andrew Yang. Another personality to get into D&D is prolific voice actor, Matthew Mercer. Mercer has been the Dungeon Master for one of the most famous D&D podcasts, Critical Role.

There is a load of D&D podcasts to choose from, especially now, since the podcast medium is so prevalent. Some more popular ones include The Adventure Zone and Join the Party. These podcasts are most likely popular as it’s much easier to just hit the play button than to gather your party for a multi-hour game.  While these podcasts are most likely worth your time, nothing will ever beat the actual thing. D&D is a game all about pretending to be someone you aren’t and with the stresses of daily life getting harder to ignore, it may pay off to just sit back and roll the twenty-sided die occasionally.