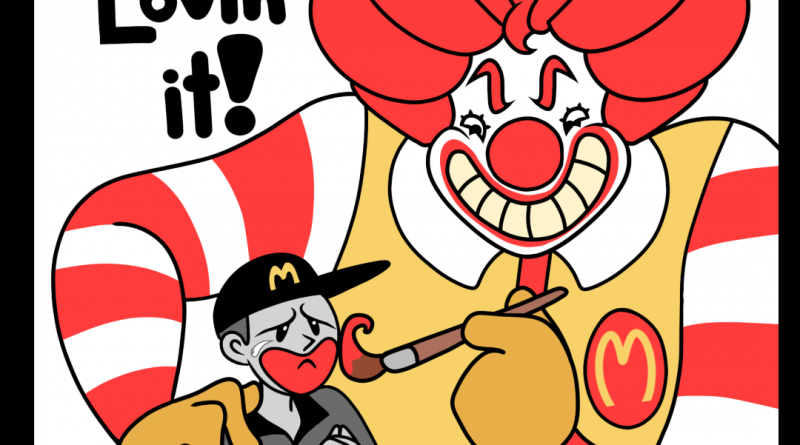 Fast food: It is delicious, easily accessible and cheap. What started off as a chain store idea is now a multibillion-dollar industry that has corporations telling us why their brand is the best. Marketing techniques such as brand personalization, market segmentation, and a heavy social media presence are all used to drive our perspective of a certain company. While this is mostly done to increase sales, corporations also do not want us to notice what is lurking behind the scenes.

One particular problem is the mistreatment of laborers. When ordering fast food, we almost never wonder where the ingredients are coming from. I, for one, am just happy to get my meal in under 15 minutes.

However, after being made aware of how many workers are treated poorly in order for me to purchase that food, it has become unappetizing.

One prime example is the small, agricultural town of Immokalee, Florida where millions of tomatoes are collected season round for brands like McDonald’s, Yum! Brands, and Chipotle. Workers wake up in the morning and are bussed to fields where they face harsh weather, emotional and physical abuse, extremely low wages, and other injustices.

According to the Coalition of Immokalee Workers (CIW), “most farm workers today earn less than $12,000 a year.” These farmworkers are not allowed to unionize and may be fired if they begin to show signs of unionization. The Fair Labor Standards Act, which guarantees a minimum wage for each hour worked, aside from requiring overtime pay to most employees, fully excludes farmworkers. The National Farmworker Ministry says that this leads to workers not being entitled to receive minimum wage and legally allows children “as young as twelve” to work in the fields. Evidently, there are many areas of concern in regard to farm workers’ rights and not many ways for them to speak out against their unfair working conditions.

Companies want to create this image of wholesomeness and community that drives consumers straight to them. The prime example is McDonald’s. We all recognize their golden arches from afar and can rely on their food to taste the same, no matter where we are. Their slogan, “I’m lovin’ it,” is practically engraved into our heads. Their marketing efforts are often clearly focused on families and children. From play areas to Happy Meals, the list of marketing tactics aimed at children goes on and on.

While McDonald’s portrays themselves as a family-friendly restaurant since 1955, it was not until 2007 that the popular fast food company stopped having families working in fields under slave-like conditions. After joining the Campaign for Fair Food, McDonald’s was required to pay their farmworkers a penny more per pound of tomatoes and buy only from growers who comply with the program, as well as complying with a few other regulations.

Many other corporations, such as Taco Bell, Walmart, and Subway have also joined this program, helping provide a better quality of life to their workers in the fields. The substandard conditions that many laborers have endured to keep their jobs is deplorable and truly shows how crucial it is to be aware of where companies are getting their products from and how those workers are treated. After all, as consumers, we have power over which companies succeed and which ones do not.