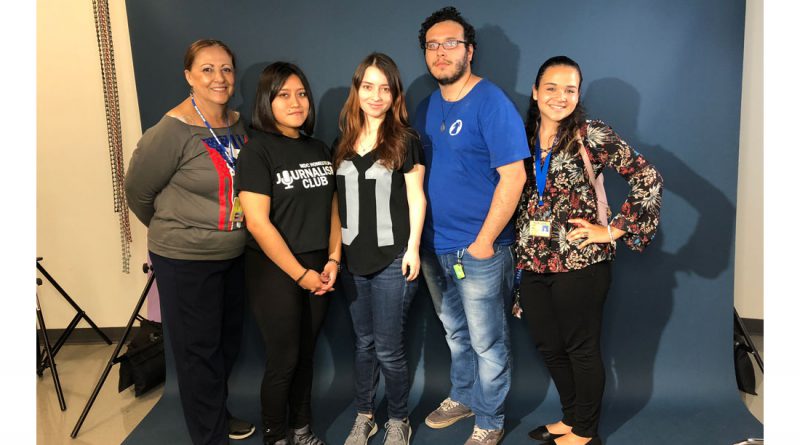 The Puerto Rican native has family on the Island. His daughter and grandson live there, so he was worried when the hurricane struck in 2017. After the storm, the Miami Dade College history professor started noticing displaced Puerto Rican students pop up in his classes.

Vazquez-Hernandez wanted to do something to help.

“I thought about something visual because the storm had been so visual,” he said.

The professors recruited about a dozen students to transcribe interviews, edit video and film the project.

“They’re majoring in this field, TV, digital production, but to see them get so involved, and they’re not getting paid, and this is not being done for a class,” Lamarre said.  “They’re benefitting from it greatly, but this is being done just for that interest. It’s good to see them grow and see how they’re putting their heart into it and how I think they’ve been impacted by the interviews because they’re listening. They’re interviewing them.”

One of those students is Daniel Ponce. He was in Lichtman’s speech class this past spring semester when he heard about the documentary. Ponce is now the director of photography, logistics lead and editor for the documentary.

“It’s been fun. It’s been a lot of pressure. A lot of time conflicts but we have been getting it done,” Ponce said. “It’s very emotional. It’s very touching to hear the stories, to see them cry, especially during the interviews It’s been an emotional ride.”

Filming started in the spring semester. The crew received a community project grant of $4,670 from the Florida Humanities Council to fund the work.

“We are interviewing them to record their stories, to record their experiences, find out about not only what it was like going through the hurricane, surviving the hurricane, but learning more about what went into their decisions to come to the mainland to continue their studies and so forth,” Lichtman said.

An eight-to-ten minute excerpt will be released for Hispanic Heritage Month on Oct. 30 at Homestead Campus from 12:40 p.m. to 1:55 p.m. in Room F-222. The full documentary will be released in early 2019 and shown during various community screenings.  Raw interview footage will also be archived at the Lynn and Louis Wolfson II Florida Moving Image Archives at Wolfson Campus.

“The experience of talking to these young people about the hurricane is always a tear-jerker—even the cameraman is crying, the person doing the interview, the interviewee—because it was devastating,” Vazquez-Hernandez said. “For those of us who live here you have some idea, but this hurricane in part destroyed practically the whole island. Their stories are really, really tough to listen to.”