A thin, slender figure is coveted by nearly every young woman. Laura Gonzalez Marin wasn’t the exception when she committed to extreme dieting and exercising to attain society’s idealized body image.

Pressured to fit this ‘slim body’ standard, Gonzalez Marin was diagnosed with anorexia at the age of 18. She weighed 90 pounds.

After fully dedicating to CrossFit three years later, she recovered her physical and emotional health, and learned that achieving a thin physique is not the purpose of exercising and eating healthy.

Today, Gonzalez Marin, 22, is an award-winning CrossFit athlete. She is also a coach at Caution CrossFit in Hialeah Gardens, and participates in local and regional CrossFit competitions. Gonzalez Marin earned her associates in arts degree in exercise science from North Campus this past spring semester and plans to transfer to Florida International University to continue her studies.

“I found a passion for something where it doesn’t matter what you look like but what you can do with your body,” Gonzalez Marin said. “Nobody cares what you look like in CrossFit. It’s not working out to torture yourself to look a certain way, you’re doing it because it makes you feel good.”

Her dream is to win the worldwide CrossFit Games and make CrossFit her career.

“CrossFit is functional movements executed at a high intensity,” Gonzalez Marin explained. “We do everything, we lift weights, we run, we do gymnastics movements. It’s fitness. It’s being able to do whatever is thrown at you. Climb a rope but then go deadlift a lot of weight. It’s for everybody because you can scale workouts to accommodate it for each person’s needs.”

Gonzalez Marin discovered CrossFit online while she was looking for ways to slim down. Initially, she didn’t think of training to compete or to become stronger, but to be in shape after gaining weight.

The determination to become thinner and doing anything to achieve this goal started early in Gonzalez Marin’s life.

Growing up in Venezuela, she was active during her childhood and participated in sports like tennis, figure skating and soccer.

As the only girl on her soccer team, she physically developed faster than the boys. They would make fun of her arms and legs because she was bigger. Gonzalez Marin began feeling self-conscious about her body.

At the age of 16, without being overweight, Gonzalez Marin set the goal of losing weight as a new year’s resolution. She thought she would receive the acceptance of others.

Gonzalez Marin weighed herself every morning and wrote down all the foods she ate each day. She would measure her food consumption to the point where she counted how many leaves of lettuce she included in her meal.

”I would eat the typical girl-trying-to-lose-weight diet, like tuna with crackers and Special K,” Gonzalez Marin said. “I would pass hours without eating and then I would have soup for dinner or just a salad, which is not enough for anybody. It was not healthy but it’s what most people think is healthy. It’s just what you see on TV about how [eating] is supposed to be.”

Gonzalez Marin’s strict workout schedule prevented her from hanging out with friends. She  exercised until she was exhausted and often felt like fainting.

With this combination of drastic exercise and dietary habits, 18-year-old Gonzalez Marin dropped down to 90 pounds at 5-foot-7 inches tall.

Everyone around her knew her health was at risk but didn’t know how to make her see it because of her distorted thoughts about weight. Even her teachers in Venezuela asked her if she was anorexic. She wouldn’t understand why they asked because all she thought was: “I’m too fat to be anorexic.”

“My parents would be super worried,” Gonzalez Marin said. “I watched them cry, not in front of me, but I would see it. I would be like: ‘What is happening? Why are they crying?,’ but now I understand. I was near death I guess.”

Two nutritionists said if she continued losing weight she would be hospitalized because her organs would start failing. They also emphasized it would be difficult for her to end her anorexia disorder.

The eating disorder is characterized by a distorted perception of body weight and intense fear of weight gain, according to the Mayo Clinic. Gonzalez Marin began to realize the seriousness of her condition when she experienced more evident side effects. Her menstrual cycle stopped for a full year because her body fat percentage was so low that she lost the ability to reproduce. She had no energy and felt lightheaded and cold all the time, having to wear jeans and a sweater even in the summer.

Although it was difficult in the beginning, Gonzalez Marin followed the diets the doctors prescribed her to gain weight and treat her anorexia. She was still reluctant to gain back the pounds. Even though she wasn’t really gaining that much weight, her mind told her otherwise.

When she was 19, her 28-year-old brother passed away when a blood clot from his leg reached his lung and prevented him from breathing.

As a way to cope with the family loss, she started binge eating followed by self-induced vomiting, a disorder known as bulimia.

She would eat uncontrollably, without being hungry, and then drink several cups of water to make herself throw up all the food she ate. Her highest weight was 105 pounds when she was binge eating.

Gonzalez Marin continues her studies and joined Caution CrossFit to lose weight. She has been consistently training for the past year and changed her outlook on food as well.

Today she sees Caution CrossFit as a healthy way to maintain a strong body and compete.

Dominick Maurici, owner of Caution CrossFit, saw her potential and encouraged her to compete. He became her coach and told her she needed to eat to fuel her body for CrossFit training.

“Her progress has been incredible. She went from just doing regular exercise to look good to now performing at a very high, elite level,” Maurici said. “I’ve never seen somebody work so hard, want something so much, and put a focus on one thing and revolve her life around that. She has a drive and it’s admiring to see it.”

As her coach, Maurici started training Gonzalez Marin for competitions. The training is longer and more intense than the regular one-hour training most people do at CrossFit. She currently trains six hours per day.

According to Gonzalez Marin, she is currently at her healthiest. She weighs 165 pounds, and her body fat percentage is 14 percent, which is ideal for female athletes.

Her diet consists of mostly vegetables, carbohydrates and proteins. Among the foods that she frequently consumes are chicken, rice, oatmeal, protein shakes with vegetables, and protein cookies.

“I’m probably the person in the gym that eats the most,” Gonzalez Marin said. “People tell me that I’m always eating and it’s weird because I used to not eat. I eat balanced and I’m flexible when it comes to eating. I used to be the complete opposite.”

As far as weight lifting, she can clean and jerk 235 pounds, lift 250 pounds overhead, and deadlift nearly 400 pounds.

Gonzalez Marin has won 2nd and 7th place in Miami-based CrossFit competitions, known as the Crush Games. She has also participated in Wodapalooza, another South Florida fitness competition. This year she placed 33rd in CrossFit in the South East region out of 10,076 women.

“Thinking back to a year and a half, she has grown rapidly. She knew what she wanted, she committed to being the best athlete she could become, and she is still growing, which is a great thing,” said Paul Sanchez, Gonzalez Marin’s friend and coworker at Caution CrossFit. “She’s committed to the gym, has fixed up her eating, fixed up her techniques, become stricter on herself and turned into the top-tier athlete she is today. Everyone is noticing it and within the next couple years everyone is going to be talking about her.”

Every day is different in CrossFit, she says. The workouts revolve around strength and endurance skills, such as lifting weights and running, respectively. Gymnastics movements are also part of the training in CrossFit, as well as cardio and traditional exercises like squats and push-ups.

“I can’t believe I wasted so much time, but at the same time it’s made me have these views that I have today, so in a way it’s helped me,” Gonzalez Marin said. “People say that it’s helped me especially for this sport just because I have suffered, you have to go to a dark place to compete, you have to push yourself, if I already know pain there’s nothing in this sport that can hurt me.”

Gonzalez Marin has more than 6,000 followers on Instagram, most of them from CrossFit. She has advised others going through eating or fitness-related problems, including teenage girls who have texted her seeking help and inspiration.

“I like posting my videos and people tell me I inspire them,” Gonzalez Marin said. “That means a lot because I never thought I would inspire somebody.”

Gonzalez Marin plans to continue coaching and competing in CrossFit. Her ultimate goal is to make it to the CrossFit Games, the highest competition in the sport. She wants to make CrossFit her career and help others train in it.

“My advice is to find your meaning, your purpose in life, whatever it is, because [when I had anorexia] I would be sad and not want to do anything, so find out what moves you,” Gonzalez Marin  said. “Go out there and find something that makes you want to live, because when you’re sick like that you’re not living. You appreciate it more because you just felt bad for so long that when you find something that makes you feel good, you won’t let go of it.” 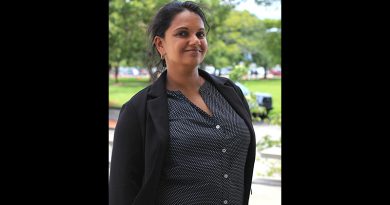 September 17, 2019 Alexa Hernández Comments Off on This Professor Wants To Hack Your Computer⁠—Legally