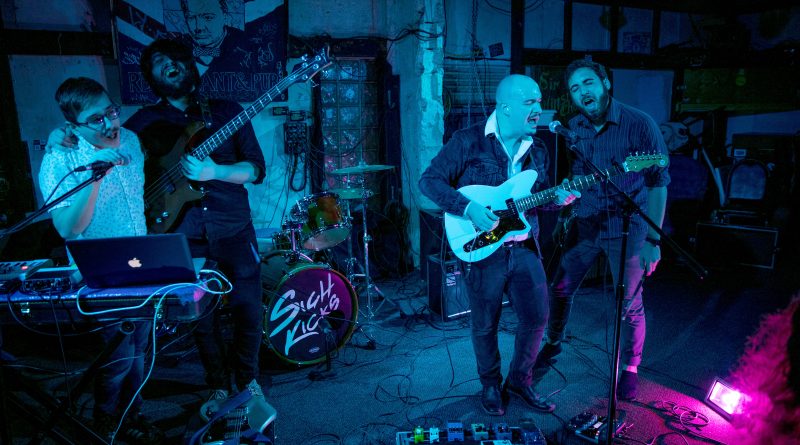 On Jan. 21, a small crowd lined up in front of the shabby but beloved stage at Churchill’s Pub in anticipation of local electronic indie rock band Sigh Kicks’ final show. It was the last time Churchill’s—or any venue —would be soaked in their signature pink and blue neon lights.

The band’s first and only EP, Nightsky, was released on Jan. 20 as the band’s bittersweet going-away present. In December of 2016, they posted an emotional letter to their fans on their Facebook page:

“Life sometimes does what it does and, unfortunately, one has to make decisions one would rather not make. It is with that, that we must announce that Sigh Kicks will be no more,” the band wrote.

The night opened up with the band’s song “Japanese Baseball” enveloping the crowd in a fusion of wavy guitar riffs and vocals that float over synth sounds, drums and tambourines.

It’s the kind of feel-good music that feels stolen straight from the Radio Mirror Park station in Grand Theft Auto V, but with a unique Miami vibe.

So why did the band break up? The best explanation is that the group blew up too quickly. Their popularity and success caught up with them. Dominguez announced he’d be leaving the band in September of 2016 and then Hidalgo announced he would be leaving shortly after.

“To me Sigh Kicks isn’t Sigh Kicks without [Sebs]. I could have continued on with Cougar. It could be done,” Alvarez said. “But from a writing perspective, it could be done. Chemistry perspective? It just wouldn’t be the same band. It loses its thing, and I didn’t want to do that.”

Sigh Kicks originally started with Alvarez and Hidalgo, who were involved in the band scene since their middle school days, where they started a little “rinky dink” band called Below Average after meeting in an after-school guitar class.

“We literally only played one song, and it was a Strokes cover and that’s it,” Alvarez said.

Alvarez and Hidalgo have come a long way from playing Strokes covers in middle school. After reconnecting in a music business class at Kendall Campus, they formed their second band together called the Antics, which had a three-year run that ended in early 2014.

The band had lukewarm success, but neither Alvarez nor Hidalgo have regrets about it because the Sigh Kicks were born from the ashes of the Antics.

“If that band hadn’t happened I don’t think Sigh Kicks would have had, even if it was short lived,  the level of success that it did…We made a lot of mistakes with that band,” Alvarez said. “So from that we decided that ‘okay’ whatever we did with that, we’re not doing it again.”

The duo then added Dominguez on bass and he brought in Borroto as the drummer.

Out of the six songs they wrote that summer, only a couple survived. One of them being “Dial Tone,” which was the first song the group released in September of 2014, and the song the group ended their final show with.

Sigh Kicks officially started in November of  2014 when the band played their first show at a house party for Alvarez’s 24th birthday.

From there, Sigh Kicks took off, opening for bands like Hundred Waters, Sails, Afrobeta and Million Young and gaining a following on platforms like SoundCloud.

“For three years I was so used to people walking out on our shows [with Antics]. Now we play a show and it’s like people hang out, people vibe, people dance, they have a good time. They come up to us afterward,”  Alvarez said.

The guys all plan to stay active in the music scene with their own projects.

Alvarez and Hidalgo are musicians in the local act Million Young, and plan to stay involved with that band for the foreseeable future. Alvarez also plans to pursue some solo work while Hidalgo finishes up an online music production degree from the Berklee College of Music.

“I’m not just going to hideaway and that’s it …we’re both still going to be active either in this community or whatever community life takes us,” Hidalgo said.

Dominguez hopes to focus on his work in another local band, Salas, and Borroto is also finishing up an online degree at MDC with plans to transfer to the University of Florida.

“I wasn’t expecting it to end this soon,” Borroto said. “I don’t regret any of it. It was a fun ride. I enjoyed every bit of it.” 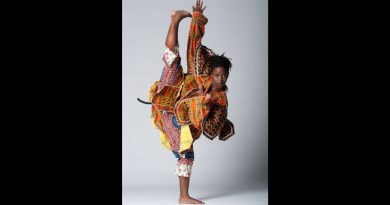 April 8, 2014 Angie Martoccio Comments Off on Beck’s New Album Goes With The Flow