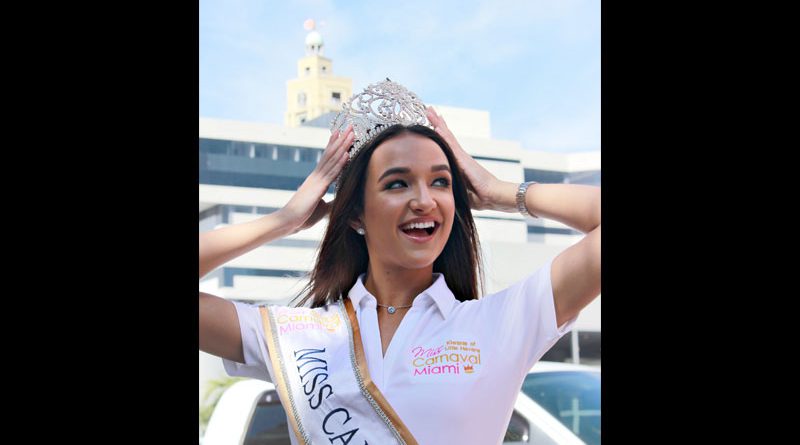 When Camila Cuesta was announced as Miss Carnaval 2019, the teenager cried as she wore her diamond crown for the first time.

The win capped a year of grueling preparation. During the competition, Cuesta, 19, strutted down the Historic Manuel Artime Theater stage in a glistening red gown, competing versus 19 women in a variety of events designed to measure her talent, beauty, intelligence and humanitarian spirit.

“My life changed at that moment. I mean, just by competing there my life was already changed,” Cuesta said. “Winning gave me the exposure and all the media that I need to get my voice out there and make sure that I can advocate for education, which is my main goal.”

Cuesta, a communications major at Miami Dade College, expects to earn her associate in arts degree this semester. She will spend the next year serving as an ambassador for Carnaval Miami and the Kiwanis of Little Havana Foundation to help underprivileged children in South Florida.

The Miss Carnaval pageant has been a tradition in Miami since 1982. The pageant encourages female leadership and inspires young women to pursue their passions through the Kiwanis of Little Havana Foundation.

Since winning her crown, Cuesta has been featured on WPLG Local 10 and Diario Las Américas.

Born in Havana, Cuba, Cuesta emigrated to the United States when she was nine years old. Upon her arrival, she couldn’t help but compare herself to her peers—the ones that spoke English in a native tongue and weren’t struggling in a divorced-parent household.

At 14, she discovered her love for pageantry and made the spontaneous decision to trade in her soccer cleats to enter the Miss Miami VIP pageant in 2015.

“I told my mom that I wanted to compete, and my family thought I was crazy,” Cuesta said. “You know, how are you going to go from playing soccer at school for so long to a pageant? So, I signed up myself. It was hard to go from such a tough sport to pageants.”

Although the pageant scene is usually portrayed as self-involved women fighting for the crown, Cuesta said her fellow competitors have supported her unconditionally and believe in the mantra that women should empower each other.

“I believe that anyone who believes [pageant stereotypes] hasn’t seen what pageantry does,” said Sabrina Ramos, Miss Carnaval 2018 and Cuesta’s mentor. “It helps women grow and takes a lot of women out their comfort zone and puts them in a situation that mimics the real world. It gives them confidence. Most of my best friends have come through pageantry, and [it] really is a growing experience.”

The feminist spirit of beauty pageants and her passion for helping children has fueled her desire to compete. She has competed in four pageants, winning first-place in the Miss Cuba Queen Of The Continents International in 2016 and placing second in the Model Search competition in 2018.

Cuesta began preparing for Miss Carnaval more than a year ago when she asked herself what kind of impact she’d like to have after winning another crown.

“The first thing I do [before competing] is stand in the mirror and ask myself ‘Okay Camilla, why do you want to be Miss Carnaval 2019?’  ” Cuesta said. “I prepare with a lot of meditation, a lot of self-confidence, you know, watch a lot of TED Talks, watch past pageant girls, who are now YouTubers, give advice. It helps you never lose sight of winning the crown.”

The hardest part of competing is the long, rigorous training that goes on behind the scenes.

Cuesta dedicated many hours each week to training sessions that prepared her for pageant interviews.

In addition, she followed a strict physical training regimen that included personal trainer sessions twice a day to tone her physique and a stringent diet that extracted junk foods and carbohydrates.

None of that happened alone—it required the help of makeup artists, photographers, trainers, stylists and the support of family and friends.

Cuesta is looking forward to her responsibilities as the crowned Miss Carnaval. This summer, she will volunteer at the Healthy Kids Summer Camp at the Kiwanis of Little Havana Foundation and participate in the Back to School drive in August.

“I believe that the door to success lies within education and guarantees us a better future,” Cuesta said. “For a lot of social problems that are happening right now, I believe education is definitely the door to help out and change those issues.”

Alongside her full-time schedule at MDC—she has taken classes at the Hialeah, InterAmerican and Wolfson campuses—Cuesta works part-time as a substitute teacher at South Miami Senior High School.

As part of her Miss Carnaval 2019 title, Cuesta qualifies for the Miss Florida USA pageant in 2019 that crowns the 2020 winner. She ultimately hopes to compete for the Miss Universe title.

“Pageantry isn’t what everybody else thinks it is. It’s not just putting on heels, a bikini and modeling—there is a compromise to it,” Cuesta said. “If you’re willing to make a change in your community, if you’re passionate about something—that’s why you join a pageant.”