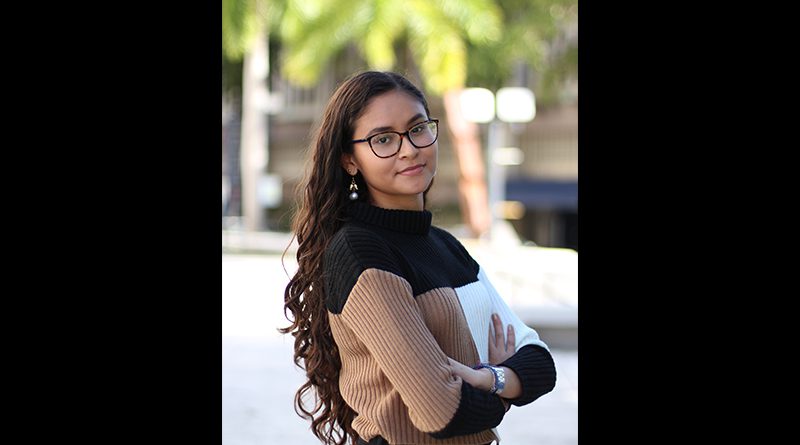 Seeking Aid: Kency Herrera, an undocumented student at Wolfson Campus, is one of several students at Miami Dade College that could be impacted by Florida Senate Bill 188. The bill, filed last August, would grant financial aid to students regardless of their immigration status.
VANESSA GIMENEZ / THE REPORTER
News
February 7, 2020February 12, 2020 Alexa Hernández

Finding universities that accomodate undocumented students has felt like looking for a needle in a haystack for Kency Herrera.

The 19-year-old nursing student at The Honors College at Wolfson Campus has stayed afloat this year through the program’s full-ride scholarship, but has seen first-hand how few transfer schools provide financial assisstance to undocumented students.

“My options are limited due to my status,” Herrera said. “Most Florida schools don’t give scholarships to undocumented students. The only one I know is MDC.”

The bill, filed by Democratic State Senator Annette Taddeo last August, would grant state financial aid awards to students in the Florida College System regardless of their immigration status, as long as certain criteria are met.

“These students are working hard to receive an education and should have access to the same scholarships and financial aid opportunities as other students,” Taddeo said. “Increasing education opportunities for students, regardless of their immigration status, is good public policy, and will have a positive effect on our community.”

If the legislation were passed, students part of the Deferred Action for Childhood Arrivals program or have been given temporary protected status by the Department of Homeland Security would be considered residents for tuition purposes.

“I think this bill is definitely something that should pass because it’s a lot of us dreamers who are trying to make it through and get full careers in this country,” Herrera said. “It’s a lot harder for us, so we work the hardest for it.”

To qualify, students would need to be in clear academic standing at any two-year or four-year school in Florida, have resided in the state for at least a year prior to receiving assistance and must submit documentation confirming status to be eligible.

The groundbreaking legislation was introduced to the Florida Senate on Aug. 26. It’s currently in line for review by the Appropriations Subcommittee on Education. Despite being shuffled through several Senate committees, SB 188 has yet to be discussed.

The Florida House of Representatives counterpart bill, HB 693, aims to grant state financial aid to undocumented students if they qualify for an out-of-state tuition waiver. It was filed last November, and is waiting to be discussed by the Higher Education and Career Readiness Subcommittee; Higher Education Appropriations Subcommittee; Education Committee.

Aid for undocumented students is specifically prohibited in Section 505 of the 1996 Illegal Immigration Reform and Immigrant Responsibility Act. In 2014, the Florida legislature passed a bill which allows undocumented students that study in any Florida public college and university to pay in-state tuition.

However, many students are still left to pay the remaining fees without financial assistance. At Miami Dade College, undocumented students pay in-state tuition at $118.22 per class credit, totalling $1,418.64 for a 12-credit student.

The limitations that come with being an undocumented student coupled with the fear of deportation can create a swarm of stress for students, according to a 2015 study by the Institute for Immigration, Globalization and Education at the University of California at Los Angeles.

The study reports 28.5% male and 36.7% female participants reported moderate or severe generalized anxiety disorder, in contrast to 4% and 9% of the average population.

“These students are studying and working hard and they long to belong. It is time to fully embrace them,” said Marcelo Suárez-Orozco, co-principal investigator of the study and dean of UCLA’s Graduate School of Education & Information Studies, in a press release. “This new data suggests a blueprint for providing a safe environment in which they may learn and succeed.”