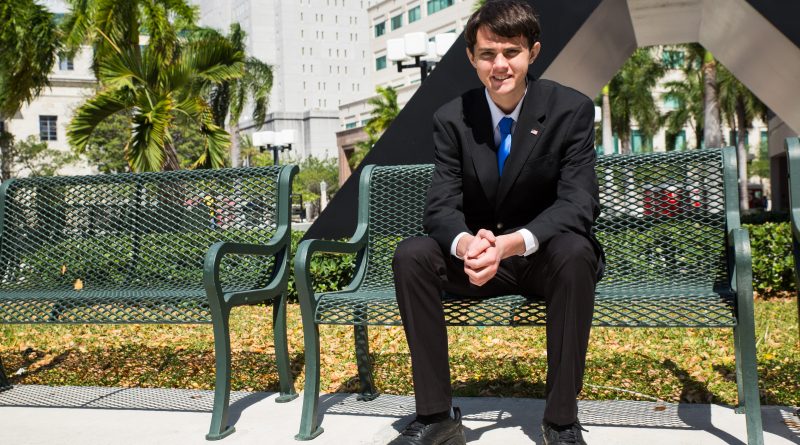 Seventeen-year-old Mark Merwitzer frequently wears a suit to meet with lobbyists to fight a social ill that is second nature to many teens—texting while driving.

Merwitzer, a junior at the School for Advanced Studies at Wolfson Campus, is advocating to pass Senate Bill 144, which would make texting while driving a primary offense in Florida, allowing police to ticket drivers for texting without a prior warning.

“While you’re driving down the road, you can see almost a lot of people texting while driving, and that’s just by an observation without having the statistics,” Merwitzer said. “When you look at the statistics, it’s even worse. A lot of people are dying every year due to texting while driving and distracted driving, and thousands are getting injured because of this.”

According to the Florida Department of Highway Safety and Motor Vehicles, texting while driving falls under the umbrella of distracted driving, which caused more than 45,000 accidents in 2015 alone. That number increased to 49,000 the following year.

Merwitzer has partnered with Florida senators and Miami-Dade County commissioners to update the state’s stance on texting while driving with a bill that has accomplished what similar efforts in the past were unable to gain: earning a spot on Miami-Dade County’s top ten priority list and passing through two senate committees.

Merwitzer’s first encounter with politics was as a 5-year-old when his mother, a kindergarten teacher, brought him to a teacher’s union protest where he rallied with a picket sign.

“I do remember yelling into a megaphone going ‘teachers deserve more respect,’ and I shared their frustration, and I was very empathetic to what was going on,” Merwitzer said.

Merwitzer agreed to the job after making sure it wouldn’t interfere with his part-time employment at Publix.

“Time management is pretty difficult,” Merwitzer said. “But I’m used to it at this point.”

Keeping an organized schedule is required to succeed in Merwitzer’s academic program. The School for Advanced Studies, located in North, Homestead, Kendall, West and Wolfson campuses, is a rigorous high school program. During their junior and senior years, SAS students are enrolled in four high school classes and at least three college courses to graduate with a high school diploma and associate’s degree simultaneously.

Even though his course load consists of classes like Advanced Placement English Language and U.S. History, he also finds the time to build and play on computers. Since he was 5 years old, he has enjoyed aviation, which led him to complete 10 flight hours and obtain a pre-solo certification in June of 2016.

His internship in the summer of 2016 with Levine Cava taught Merwitzer the significance of responding to constituents, a population of voters belonging to a specific area, and how the legislative process operates at the county level.

Merwitzer was drawn to the issue of texting while driving at the age of 16. He noticed drivers, preoccupied with their cell phones, swerving and speeding as he passed through the MacArthur Causeway connecting to Miami Beach.

Concerned, Merwitzer, who holds a learner’s permit, decided to advocate to change Florida’s current stance on texting while driving from a secondary offense, meaning the driver has to be pulled over for another wrongdoing to receive a $30 ticket for texting, to a primary offense.

“If you look at other states, they’ve all seen reductions in distracted driving crashes after they’ve enacted this kind of legislation, so based on that, I think that it would have a similar effect down here,” Merwitzer said. “…It would reduce the amount of deaths and definitely reduce the amount of injuries.”

Thirty-nine states, including Georgia and Ohio, already define texting while driving as a primary offense.

Since municipalities are not allowed to initiate their own texting bans, Levine Cava suggested Merwitzer promote the bill to as many people as possible at local town and city councils and youth councils.

As a member of the Palmetto Bay Youth Involvement Board, where he resides, Merwitzer proceeded to invite former state Senator Miguel Díaz de la Portilla to attend a meeting. Soon enough, Díaz de la Portilla agreed to sponsor the bill in October of 2016.

When Díaz de la Portilla lost his re-election race, he and Merwitzer reached out to Senator René García to sponsor the bill in the Senate

“He’s very supportive,” said Merwitzer about García. “He has a personal connection toward this.”

A few years ago, García confronted the dangers of distracted driving. While he was texting and driving, he crashed into a guardrail as he was entering a highway.

García drafted SB 144 and introduced it to the Florida Senate in December. Representative Emily Slosberg, a Democrat from Delray Beach, introduced the House’s counterpart.

“Passing this bill will save lives,” said Slosberg, who introduced House Bill 47 and House Bill 69. “It’s the number one cause of death for teens. It’s common sense.”

Currently, the proposed legislation is stuck in the House due to the lack of a prominent Republican sponsor in the House and a block placed by Senator Jose Oliva of Hialeah.

“He’s not getting behind it, and if anyone can help me with this, it would be him,” Merwitzer said. “Because he’s next in line to become the next speaker of the House, and having his support would be amazing for the initiative.”

Back in 2013, Oliva fought against the passing of the bill that made texting while driving a secondary offense. He advocated to protect people’s civil liberties, sponsoring an amendment allowing cell phone records to be used as evidence only in the case of accidents causing death and injuries

But the committed 17-year-old has not been deterred by the obstacles threatening the legislation.

“What I plan on doing [to gain his support] is sitting down with him and asking him if he would at least allow a hearing on the bill even if he doesn’t support it personally,” Merwitzer said. “So, it would allow [for the bill] to get voted on, and at least let it go through committee.”

The Reporter made several attempts to contact Senator René García and Miguel Díaz de la Portilla for this article, but they were unavailable for comment. 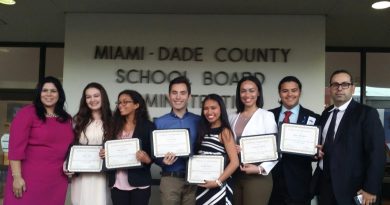 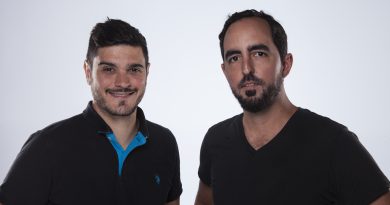