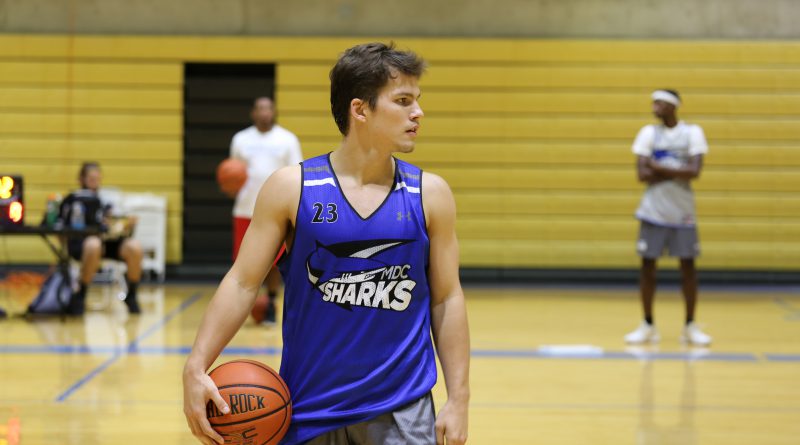 Power forward Andrei Kirilenko and center Timofey Mozgov are Russian athletes who have made their mark on the basketball court.

Arseniy Andreev a 6-foot, 185-pound guard hopes to add his name to that list soon.

The stocky point guard is averaging 9.6 points and 6.3 assists per game this year as the floor general for the Miami Dade College men’s basketball team. The Sharks are 2-1.

“Arseniy is a player that you need on your team on and off the floor,” Shark’s head coach Kevin Ledoux said. “Tough defender. [He] doesn’t back down [from] anyone.”

That tenacity has been there since his youth. He has channeled it on the basketball court. Andreev, who was born and raised in Moscow, was a key contributor to the Junior Russian National Team that won four consecutive Russian National Championships from 2011-2014.

Andreev quietly became his country’s top-rated point guard after playing for Parma, one of the top club teams in the region.

“It was a good experience playing for my country and being around a lot of good players,” Andreev said.

His play there led him to be recruited by athletic powerhouse IMG Academy in Bradenton, Florida. The transition wasn’t an easy one.

“I did not feel as comfortable speaking [English],” said Andreev, who today speaks Russian, English and French.“It took me some time to get comfortable with the language.”

But basketball still came natural to Andreev at IMG Academy. He reached the Dick’s Sporting Goods High School Nationals tournament in New York, playing against some of the top high school teams in the country as a senior.

Andreev impressed enough to be recruited by some Division I schools such as Western Kentucky University but he connected with Ledoux after he played in a Hoop Group event in Philadelphia this past July. He was attracted to MDC, he said, by the program’s rich history, the school’s education and Miami’s balmy weather.

In the classroom, the 19-year-old freshman is majoring in mathematics. He aspires to earn a doctorate degree and get a job in the mathematics field in the United States or Russia.

“He carries a 4.0 GPA and has a very bright future,” Ledoux said. “I am looking forward to seeing his game grow in our pressure defense and up-tempo offensive system this season.”

The Sharks next game will be on the road versus St. Petersburg College at 7 p.m. on Nov. 15.