Why should you care?

Your children will never bear the brunt of widespread antagonism, racism or national elitism. You, and the privilege of your name, will never be defamed for its proud heritage— its working heritage. A heritage so selfless it will pack a life into a suitcase and waltz into the belly of a beast hoping to find a gentle giant in which to raise its children.

Tell me, President Trump, can you imagine a mother half as kind? A father more than willing?

This country you now run, the modern sanctuary that made a nation out of homes, was built on the backs of immigration—individuals whose ancestors called themselves Other Nations. This is no time to be exclusive.

Why, President Trump, can’t you take a minute to consider not repealing DACA?

Deferred Action for Childhood Arrivals targets the similar goal of Development Relief and Education for Alien Minors, or rather the DREAM Act, which did not pass in 2010. These DREAMERS are individuals whose choice in the matter of migrating to the United States was not theirs. In order to qualify for DACA, they must have arrived here before turning 16.

Do you, President Trump, remember where you were at 16?

At age 16 you were participating in High School sports— immigration policies and issues were far from your conscience —and classmates described you as athletic, intelligent and a good guy. Some have even remarked at the apparent affluence in your demeanor. Higher education was an affordable prospect and work permits were not synonymous with opportunity. Policemen did not frighten you and fear was not a coat you wore like uniform. These privileges many grip with entitlement and ease are barely touchable to others.

Even though the picture they paint of you seems to be far from the reality of many DACA students today, I am confident that it does not take a DREAMER to understand the simplicity of this American dream— to live free of persecution and pursue happiness.

I implore you, President Trump, to look at the documents which bind and protect us as citizens and noncitizens alike if empathy does not persuade you. Thomas Jefferson, principle author of the Declaration of Independence, boldly stated that “all” men are created equal and “are endowed by their Creator with certain unalienable Rights, that among these are Life, Liberty and the pursuit of Happiness.”

“All men” dismisses exception and “unalienable” disrupts the language that disenfranchises us. This Declaration which protects citizens and empowers the individual is the framework within which our great country is founded upon. It is the American ideal to rise from rags and work toward riches. DACA among other things is a paved road toward employment and national contribution. The misconception that individuals such as these do not wish to work is trumped by the very purpose of its institution.

You will not lose widespread partisan support by supporting DACA. This is a nonpartisan issue that affects people in a way that goes beyond party lines.

This is your moment, President Trump. As you contemplate how history will write about you, think about what that chapter will look like. For those who esteem you, reinforce the leader you promised them you would be; for those who dislike you, show them you are a leader willing to look beyond the borders that constrain us; and for those who have no power to say, show them that those who did made no mistake in choosing you.

When you make the decision for DACA, what will that chapter look like? 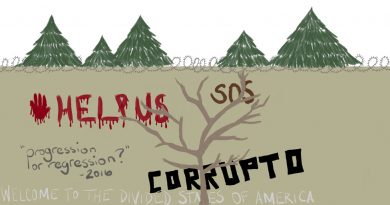