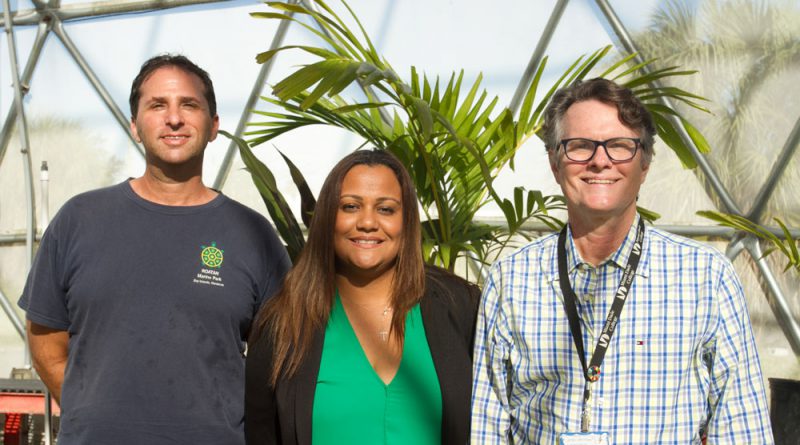 Shannon Harry pays a visit to Kendall Campus’ cafeteria at 1 p.m. every Wednesday.

She takes egg shells, banana peels, coffee grinds and fruit pits left behind from the lunch preparation to lather onto a thick layer of brown leaves and dirt.

Crafting the compost pile at Kendall Campus’ garden every week has become a routine for Harry as part of the Horticulture Clubs’ Food to Compost project.

The initiative reduces waste on campus by repurposing kitchen food scraps to produce nutrient rich soil in the Horticulture and Technology Center Nursery.

“It’s about awareness and about reducing waste in our community,” said Harry, who helped start the project last year while serving as the Horticulture Club president. “It’s inspired me to see the community getting involved.”

Now, the project is set to branch off at North Campus to revitalize the botanical garden near the Science Complex. Compost from the cafeteria and Lakeside Café will be collected every Tuesday and Thursday by garden manager Gregory Sobel and members of the YES! for Environmental Sustainability Club at North Campus beginning in March.

The scraps will then be transported to the garden. They expect the project to be fully operational by the start of the fall semester.

“The more we can demonstrate resilience and sustainability to our students, then you can take it to your own home and demonstrate and compost at home,” said Stephen Nesvacil, project coordinator at the Earth Ethics Institute. “It’s not a gourmet idea. It’s survival now; we have to teach survival.”

The project began last January as a brainchild of the Kendall Campus Horticulture Club. Students noticed the composting site at the Horticulture and Technology Center Nursery was in rough shape. The space was only occupied by a block of cement and three plastic bins.

They decided to create a student-run compost site to help revitalize the project. The idea was brought to Harry and Theresa Chormanski, program directors for Landscape and Horticulture Technology, who began drawing up plans for the initiative.

The club then began collecting donations around campus for weeks, but couldn’t get a hold of enough scraps to make a pile of soil. But that changed when they reached out to Canteen, the College’s food vendor.

After a year of tracking their progress, the students have generated more than 54 cubic feet of nutrient rich soil.

“We are reducing waste and creating value for the campus,” said Adjaline Giglio, the current president of the Horticulture Club. “We are teaching students how to use what you grow. It’s a great skill to have.”

Due to the collection’s success, plans were drawn up to bring the project to North Campus, one of three campuses that work with Canteen.

To make this happen, the biggest hurdle has been starting the project from the ground up. The funding mainly comes from Canteen, but the YES! for Environmental Sustainability Club at North Campus is charged with revitalizing the abandoned garden in a short period of time.

“Canteen is excited to move forward with this project and support our local Miami Dade College community,” said Gina Duran, district operations manager of Canteen. “We highly value our partnership with MDC, and our vision is to see the final product come full circle to help those students in need.”