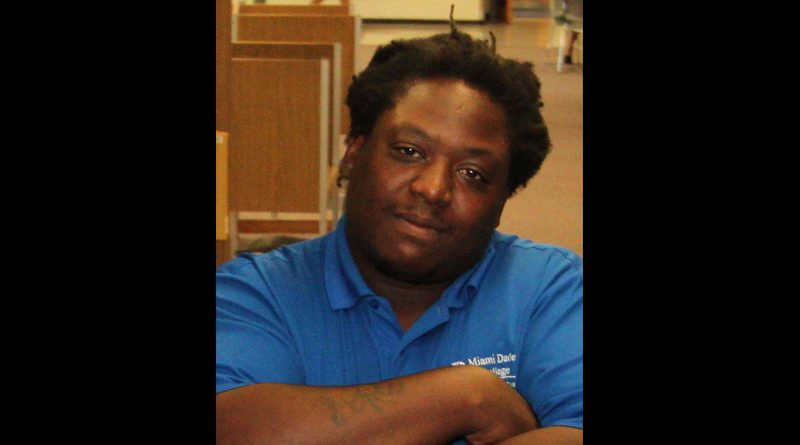 Vincent White smiled as he recalled his friend and colleague Casey Thomas shout his catchphrase, “This is what we do,” into the air at the University of Miami’s Watsco Center arena.

The words echoed throughout the stadium after the North and Eduardo J. Padrón commencement ceremony on May 4.

Playfully known by his colleagues on the North Campus moving crew as “Fatboy Casey,” he often said the phrase while arranging furniture at Miami Dade College events.

Thomas passed away on June 25 after having a heart attack caused by a blood clot in his leg; he  was 38.

Thomas was born on July 16, 1980 in Miami. He grew up as the middle brother between Corey and Stacey Thomas. As a kid, Thomas spent the bulk of his time going to school, playing with his brothers, and helping his second cousin, Keith Oliver, fix old cars.

“He stayed under me working on cars [when] he was a little baby, giving me wrenches and everything else,” the 59-year-old Oliver said. “He loved cars.”

The passion traveled well into adult-hood. Before his passing, Thomas was fixing an early 1970’s green Chevrolet Donk.

Due to family issues, Oliver gained legal custody of the boys when Thomas was five because they risked ending up in the foster-care system. When the judge asked Oliver how he would take care of the three young boys, he responded, “I’ll split a loaf of bread in four and we’ll all eat.”

After the second court visit, Oliver gained full custody. Thomas saw his cousin as a father figure, one that kept him out of trouble and disciplined him.

“He had some homeboys, and they came around the house in a car while I sat in the front porch. One of them said ‘Corey, Casey, let’s ride!’ and [Corey and Casey] busted out the door. They were 14 then and I said ‘Y’all ain’t going nowhere.’ They got all mad,” Oliver said. “Later that day at about 11 o’clock we were watching TV and I saw on Channel 7 News, a car hit a pole, hit another car, and the people in the car got killed. I said, ‘Y’all come here! Whose car is that?’ They looked and said ‘That’s the twins’ car!’ Both of them broke down crying.”

When he was 15, Thomas earned his first job at a fish market. In 2002, he began scrubbing and waxing floors as a part-time custodian at North Campus. Slowly working his way up, Thomas began setting up furniture at events; he was eventually promoted to a full-time position with the College in 2004.

Thomas’ loved ones remember him as a hard worker with a giving attitude. About six months ago, Thomas began the process of trying to purchase the triplex he lived in with his brother Stacey, his mom Julia, and his stepdad Jimmy.

“That was a big, big, big, five star change in his life,” Oliver said. “He pulled it together, met with the people. The people denied him twice. He tried again and they okayed it. That was his goal right there and he fulfilled his goal very well. I love him for that.”

Glen Fulton, the moving crew supervisor, met Thomas in 2002 when he began working at North Campus.

“The same day he passed, we had a conversation. He was telling me [that] his dog was acting vicious, which could be dangerous because a dog could bite somebody. It might get you sued, and then you have a lien on your property,” Fulton said. “He was talking like he was all grown up now.”

Regarded as a dependable and vibrant person, Thomas’ friends leaned on him for car rides to work. He was dedicated to his job—often staying late, or picking up extra shifts on the weekends when needed. Colleagues were often motivated by his dedicated presence in the department.

He was also known for his sense of humor:

“We all took a trip to Tallahassee for the College and somebody [passed] gas in the car. Everybody looked at [Thomas] and he said ‘What? It wasn’t me’,” Fulton said. “We had to pull over and let the car air out.”

Throughout Thomas’ 17-year relationship with the College, he developed close friendships with his colleagues. They often met each other’s families and hung out on the weekends at barbecues.

“When my wife passed away, he helped me out a lot,” Fulton said, tearing up. “That was special to me because he was there when I needed somebody. And, that’s what we do.”

October 8, 2013 Diana Cricien Comments Off on Campus Services Employee Recovering After Being Struck By A Vehicle At North Campus

February 12, 2016 The Reporter Staff Comments Off on North Campus To Host Speech And Spoken Word Contest