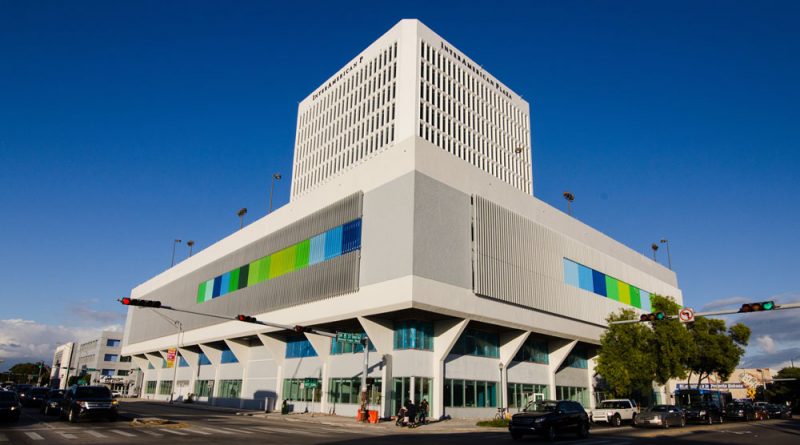 After a $77-million investment by the College, outsourced classes at the Koubek Center and a building covered in dust and dirt, InterAmerican Campus’ students, faculty and staff will occupy the new facilities of building 6, located at 701 S.W. 27th Ave., in the upcoming spring semester

The remodeled 471,000-square-foot office building was originally purchased by Miami Dade College in 2012 from Shavuot Realty for $25 million. It took $52 million to renovate the old office structure including construction, furniture and technology expenses.

The building, which takes up a square block, has two main components: a wrap-around parking garage and lower level store-front, mezzanine and outdoor space along with a 15 story tower that emerges from within the structure. It sits adjacent to the original IAC building.

Eight out of the 27 new classrooms opened for the first time this past fall term to house some math, speech, English and philosophy classes.

For the entire fall semester students had to share elevators and stairwells with construction activity that was dusty, dirty and noisy.

“That added major challenges,” Piersol said. “Trying to remodel an existing building while still being used. It’s kind of like doing heart surgery on someone while they’re running down the street.”

This was possible because of the project’s fast-track technique that allowed the architects to begin construction before the final designs were completed. The College, architects and construction managers worked collaboratively on the undertaking.

The lack of space at IAC forced the administration to outsource the campus’ classes to the Koubek Center located four blocks north at 2705 S.W. Third St.—a five-minute walk from campus—from January 2015 to April 2016, according to IAC President Joanne Bashford.

InterAmerican Campus is located in the heart of Little Havana and offers more than 200 degree and certificate programs, including associate’s in science and interpretation studies. Janelle Fernandez, the director of campus administration at IAC said the campus had 13,000 degree-seeking students in 2015-16 and 19,000 total students.

The construction lasted nearly two and a half years and was an extremely complicated process, according to Piersol and Bashford.

Building 6 was redesigned to provide a wide variety of amenities to students. These include a common learning area—a combined library, computer courtyard and tutoring services space. A new Student Life Center, bookstore, outdoor plaza and a variety of dining options take up 35,000 square feet spread throughout the building’s first floor.

The second floor mezzanine level is dedicated to improved classrooms, offices and lounges for the Honors College and the School of Education.

The facility has a brand new elevator and stair structure. Other features include spacious classrooms with recently bought furniture and views of Downtown, Brickell, Coral Gables and Coconut Grove.

Joseph Martinez, a biology major in the InterAmerican Campus Honors College, is particularly looking forward to the extra classroom space.

“There’s always a lot of people going everywhere at the same time,” Martinez said. “Having another building would be an improvement, and it’s been a huge success already. The classrooms are pretty comfortable and very spacious, and that only improves the quality of class.”

The structure was exclusively planned with students and department’s needs in mind. Throughout the design process, various meetings were held to identify and meet those needs.

Valentina d’Empaire, a 2016 IAC graduate, attended one of those meetings nearly a year ago.

“Without that building we don’t have that sense of commitment to the campus,” d’Empaire said. “A lot of students just go to class and then leave. This space will help students commit more to the campus just by having that sense of place to hang out.”

The campus’ administration plans to host a ribbon cutting ceremony in February for the building’s grand opening. No specific date has been set at this time.