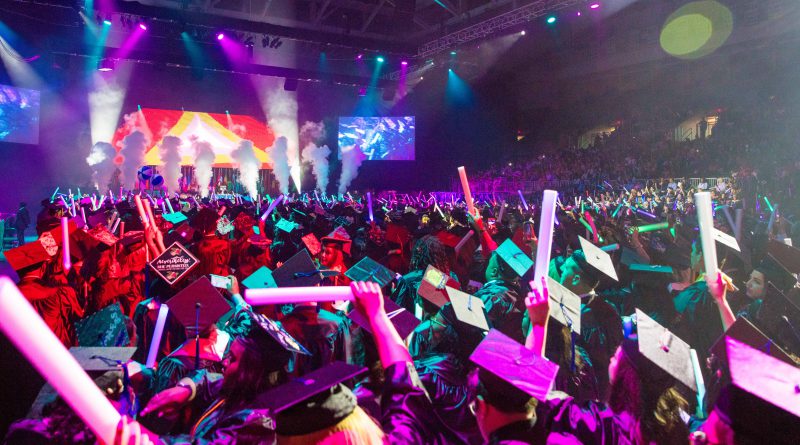 School's Out: Graduates celebrate during North and InterAmerican Campus' commencement ceremony on May 5. Miami Dade College hosted five commencement ceremonies at two separate locations: the University of Miami's Watsco Center and the Kendall Campus gymnasium. For more photos from graduation, check out The Reporter online at www.mdcthereporter.com.
OMAR NEGRIN / THE REPORTER
News
May 18, 2018May 21, 2018 Corbin Bolies

Graduation was a family affair for Octavia Anderson.

“It was a big accomplishment for myself and my son and nephew,” Anderson said. “To see it in a complete stage, it was exciting. I was overjoyed.”

Anderson, a supervisor in the copy center at North Campus, initially pursued a career as a corrections officer but enjoyed the field of criminal justice so much that she decided to switch her focus. She hopes to find a part-time job dealing with juveniles in the justice system, focusing on rehabilitation.

Anderson was one of almost 17,000 students who attended five commencement ceremonies on  May 5, a record number for a college with more than 165,000 students. The ceremonies were at two locations: the University of Miami’s Watsco Center and the Kendall Campus gymnasium.

“This generation that is coming to the College at the present time is the most resilient that I have ever observed,” said MDC president Eduardo Padron in an interview with The Reporter. “I think it shows the dedication and the perseverance and the sacrifices and how they honor their families by getting credentials that will lift up entire families, not just them.”

Each commencement ceremony had a different speaker.

Francis Suarez, mayor of City of Miami, at North’s and InterAmerican’s ceremony; Karen Stout, Achieving the Dream CEO, at Homestead’s ceremony; Allan Golston, president of the United States program of the Bill & Melinda Gates Foundation, at Wolfson and Hialeah’s ceremony;  Mildred García, president of the American Association of State Colleges and Universities, at Medical’s ceremony and Laurene Powell Jobs, president of the Emerson Collective, at Kendall and West’s ceremony.

“I was so excited to be asked,” said Powell Jobs in an interview with The Reporter. “Everything about MDC is the future of the United States.”

Garcia mixed Spanish and English and drew from her own college experiences in her commencement speech.

“I am a community college graduate and a proud one,” Garcia said. “From this moment forward, your education will be your first line of defense in a world that will challenge you.”

Wolfson Campus student Julio Llorenty is ready for that challenge.

Llorenty earned his associates in arts degree in political science after two and a half years at Wolfson Campus. Llorenty was never interested in higher education—he instead dropped out of high school and devoted nine years to military service, where he served as a sergeant to attend college. During his tenure, he spent a year in Afghanistan.

Four years after leaving service, he found his footing at MDC. He hopes to use his degree to work in international relations and eventually with the United Nations.

“They helped me by giving me the proper tools to better myself with a lot of programs I didn’t know about before,” Llorenty said. “Miami Dade gave me a chance to better myself and improve.”

Llorenty, a 35-year-old father of three, took his children to graduation so they could watch him walk across the stage and receive his diploma.

“I wanted them to see [my graduation] so that when they get older they can achieve their goals like I did,” Llorenty said.