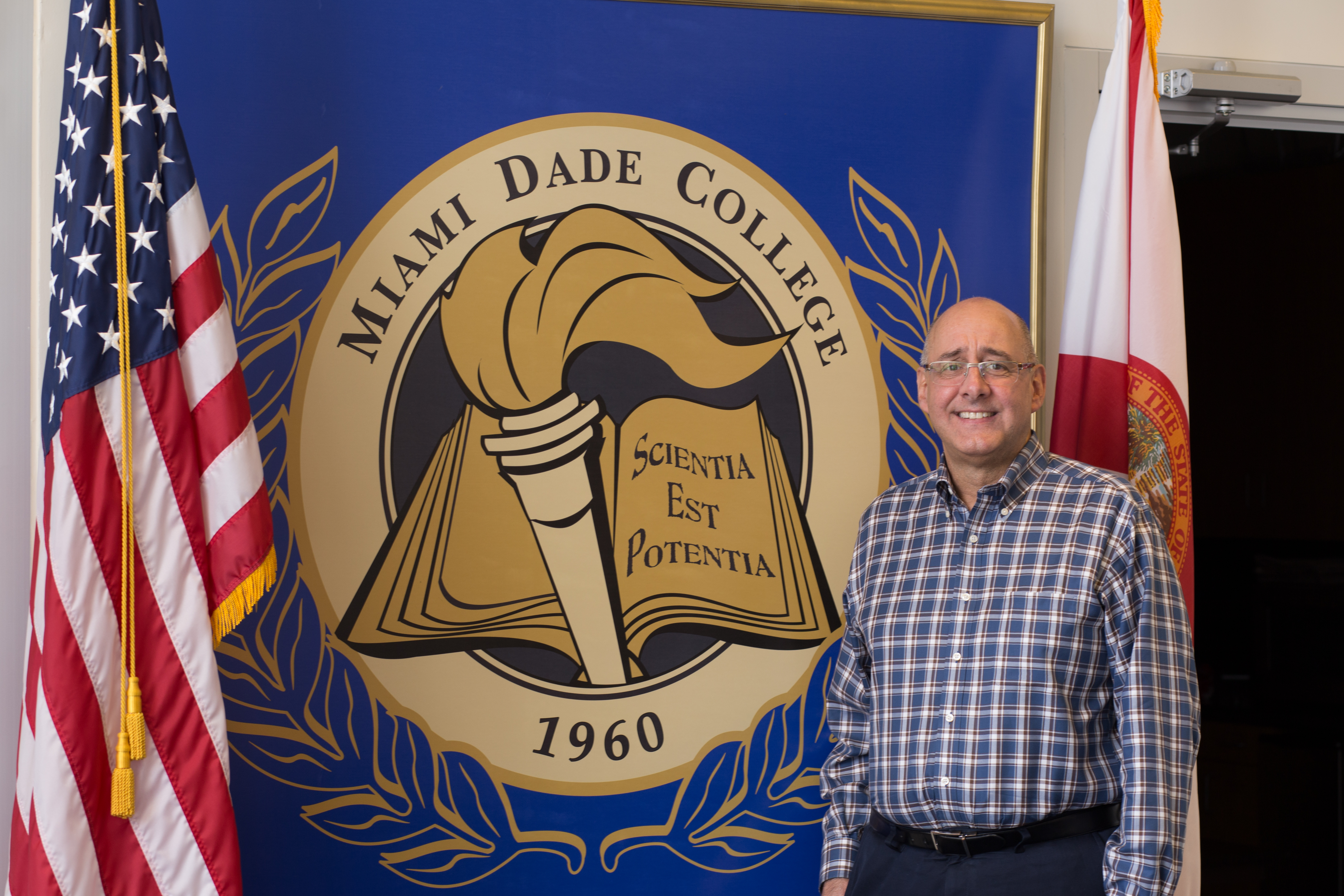 It included stints as a professor, a chairperson, an academic dean, campus president at Wolfson Campus and his most recent assignment as College Provost.

He had educational pit stops at Hialeah, InterAmerican, Kendall, North, and Wolfson campuses, but those who know him say his reach was much broader than that.

After serving MDC for nearly three decades, Montoya, 61, retired from the College. His last day on campus was August 8.

“I will tell you that he is a fearless leader, a true intellectual and a person of great integrity,” said college legal counsel, Carmen Dominguez. “ It has been a great honor for me to have had him as my boss.”

Born in Camagüey, Cuba, Montoya traveled to Panama after the Cuban revolution in 1960. Three years later his family moved to Costa Rica, where he lived for 17 years. He studied at Monterrey Institute of Technology and Higher Education where he received his bachelor’s degree in business administration.

During that time he completed his master’s degree in finance at Florida International University  teaching part-time at St.Thomas University, while still working at the consulate.

At STU he taught accounting and business strategy as an adjunct professor while looking for other options.

“I liked teaching, and I liked the university environment because number one, I was a graduate student at FIU, and I was an adjunct instructor at St.Thomas University, and I explored Miami Dade [College] and then eventually they hired me,” Montoya said. “I really like to transmit knowledge to other people who are going to use that knowledge for improvement of their lives.”

He started at MDC in 1987 as a full-time professor at North Campus. He taught a variety of subjects such as economics, accounting, finance, business statistics, banking, and business mathematics. He stayed at North Campus for 11 years while also teaching at Hialeah and InterAmerican campuses, which were outreach centers at the time.

During his tenure as a professor, Montoya received the Endowed Teaching Chair award twice. The accolade is given to professors who make student education their top priority and are effective in professional growth.

Montoya said he valued his time as a professor.

“Money can’t replace the kind of feeling that you feel when you know that people recognize that you contributed to their development,” Montoya said.

But his career as a college administrator beckoned.

He was promoted to chairperson of the Business Administration Department at Kendall Campus and then was selected as academic dean.

In 2003, he became president of the Wolfson Campus and served in that capacity for six years. Then in 2009, Montoya became College Provost, serving as the chief operating officer for the College.

“I have known Dr. Montoya from the time I was a chemistry faculty member at this campus.  At the time he was the Wolfson Campus president. From my earliest interactions with him, I was always struck by his honesty, kindness and willingness to help,” said Lenore Rodicio, who is replacing Montoya as College Provost. “He very quickly became one of my mentors, and I owe a great deal of my professional success to him and his guidance throughout the years.”

His plans for retirement are bountiful.

Montoya’s first plans are to travel to Mexico with his wife in celebration of the 40th anniversary of the completion of his bachelor’s degree with his Mexican classmates. In December, he will be visiting Atlanta for a recognition ceremony as chair of the Miami branch of the Federal Reserve Bank of Atlanta.

During his stay in Atlanta, Montoya and his wife will be visiting CNN headquarters and the Coca-Cola main office. The following year they also plan on visiting the Galapagos Islands in Ecuador.

Aside from traveling, Montoya plans to tidy up his home and give additional support to his three kids.

“Life is difficult for young people today, to get a good job, to acquire a home, to raise children when you have to work, it’s difficult,” Montoya said. “My wife and I want to become a resource for them.”

Future plans include digitizing a compendium of about 200 photo albums. The collections will each have a written narrative in English and Spanish.

He also looks forward to being a more active participant at College events.

“In many instances I didn’t have the time to enjoy all the cultural activities and performances provided by this institution for free to the personnel and the students,” Montoya said. “I am going to enjoy the pretty sight of MDC while some other people are handling all the operations and the issues, and Rolando Montoya will come here for the Prometeo plays, the concerts of the New School of The Arts, the movies of the film festival, the author presentations of the Book Fair, that is my plan.”

His colleagues said his diligence and professionalism will be missed.

“Dr. Montoya has always worked hard, going the extra mile for everyone, whether a student or a colleague,” said Education Specialist Gabriela Buitrón. “I wish him a retirement that rewards him for all of his dedication and labor at MDC.”