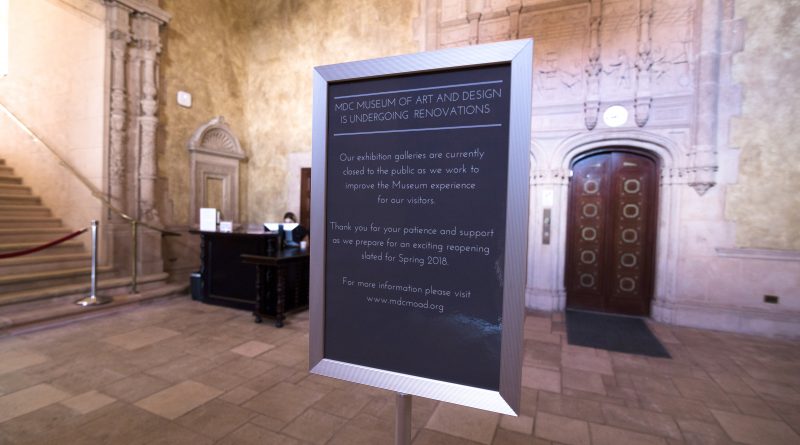 Located in the cultural megacenter that’s also home to the offices of the Miami Book Fair and the Miami Film Festival, the Museum of Art and Design (MOAD) will be closed until the spring of 2018.

The temporary hiatus is part of an effort to make way for a 2,600-square-foot exhibition that will hold historic materials from the Kislak Foundation, including the earliest distinctively American atlas and a 1494 letter from Christopher Columbus, according to Natalia Crujeiras, the executive director of cultural affairs at Miami Dade College.

“You can’t bring new exhibits to areas where there is construction happening,” Crujeiras said. “We’re shutting down the museum itself, but bringing the museum to the public.”

The large donation was received by the College in late January from the Jay I. Kislak Foundation.

The Kislak Gallery will be adjacent to the historic New World Mural, located on the first floor that celebrates Ponce De Leon’s 1513 discovery and naming of Florida.

Other components of the renovation include basic maintenance. Since the Freedom Tower was  built in 1925, the air conditioning, elevators and other structural components need to be updated. Similarly, the maintenance will update the building to serve people with disabilities.

While much of what they are planning remains under wraps, the museum’s Executive Director Rina Carvajal said that the year-long renovation period is just a dress rehearsal for a “museum without walls” or city-wide programming.

The museum plans to do work involving public space, neighborhoods and collaborating with different organizations throughout the year, and will also use the time to plan future exhibits and fundraise.

Carvajal has been occupying the position for a few months and has already started developing plans to put MOAD on the map.

“I call it the ripple effect. The ideas and the issues we are discussing here in the exhibitions, we have an interconnection with the larger issues outside the museum, in the city,” said Carvajal, whose previous experience includes working at the Metropolitan Museum of Art in New York City as well as the Perez Art Museum here in Miami.  “We’re going to be working in collaboration with many people…We’re trying to do this idea of a museum without walls. We are participating in the city and we are expanding in the city with the issues that we are raising and the people with whom we’re going to be involved.”

Crujeiras said she is excited about  the renovations.

“I think it’s important to remember that we’re making these changes to better serve our public. To give them something they didn’t have,” she said.