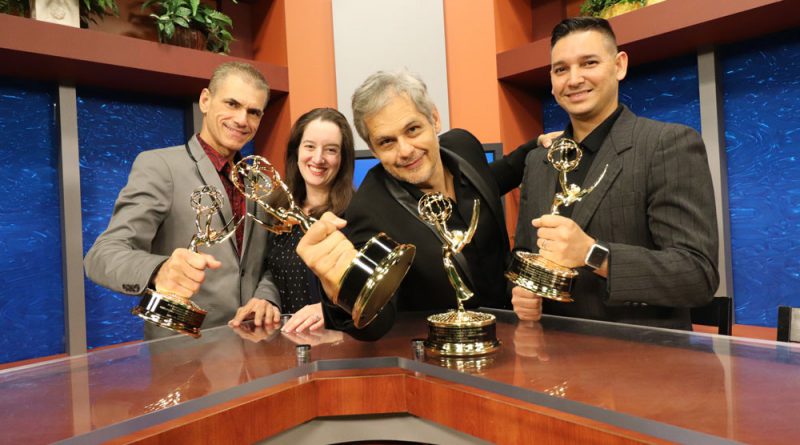 MDC-TV is on a winning streak.

MDC-TV won for Sustainable Fashion, the second installment of the ongoing series Fashion Forward, in the Informative/Instructional category, a new award.

“Everybody is happy,” Rubalcava said. “We try to do our best work because we love our profession. When the Academy gives you an award, you feel blessed.”

MDC-TV, a college broadcasting station located in North Campus, has been viewed by more than 1.3 million homes in Miami-Dade County and broadcasts seven days a week in English, Spanish, Creole and French. The station can be viewed on AT&T U-Verse (Channel 99) and on Comcast (Channel 78).

It was spawned when the College took the reigns of Miami-Dade County’s community access channel in 2008.  It is run through the College’s School of Entertainment & Design Technology.

MDC-TV’s previous wins have been under the Special Events Coverage (Other than News or Sports) category for their coverage of the Video Game Concert performed at North Campus.

“The team had to learn how to be daring and different,” Rubalcava said. “We’re always changing how we do things in our productions, and this project was no exception.”

Sustainable Fashion, hosted by Miami fashion designer Rene Ruiz, explores how Miami Dade College’s Miami Fashion Institute at Wolfson Campus produces eco-friendly garments. The almost 30-minute episode focuses on the Upcycle Project, which mentors students on using sustainable fashion in their clothing and encourages them to use designs that will not harm the environment.

“I believe we’ve always set ourselves to a higher standard,” said Alvarez, the producer of the series.  “We strive to produce quality content.”

The Suncoast Regional Emmys are a chapter of the National Academy of Television Arts & Sciences and are regarded as one the highests achievement in television. The organization was founded in 1955.

“The Emmys were wanted and well-deserved,” Aiello said. “The Academy recognized what a small station could do.”

To view the winning episode, go to: www.youtube.com/watch?v=lou1wFa9i4M&feature=youtu.be