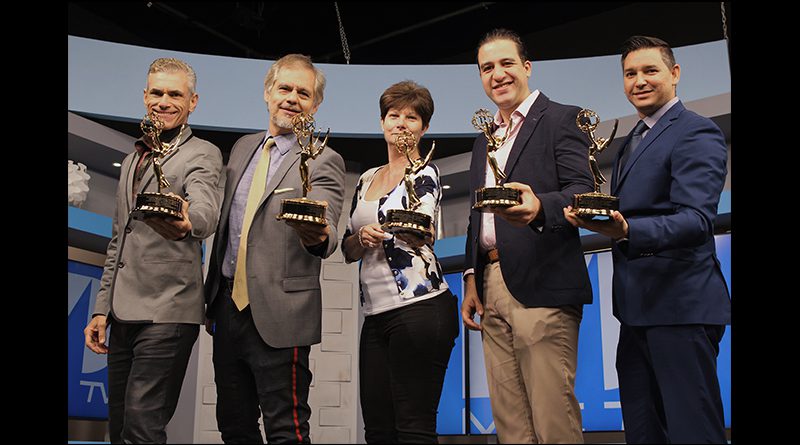 The find translated into an episode entitled the Jackie Gleason Musical Revival by MDC-TV, the College’s TV station based at North Campus.

“A treasure. It’s amazing, in perfect condition and with not a part missing,” Bade said. “It was left by Jackie Gleason and his orchestrator for students to discover in the future.”

The episode catapulted MDC-TV to its fourth consecutive Suncoast Regional Emmy on Dec. 14 at the 43rd annual Suncoast Emmy Awards ceremony in Orlando.

“[I feel] incredibly proud,” said Ariel Rubalcava, who served as executive director on the project. “The spirit and the great performance of everyone involved in the team and the passion they put into the project is what really made it happen. In the end, that’s what caught the eye of the judges who decided that we deserve an Emmy.”

The network won in the category of Special Events Coverage (Other than News or Sports).

MDC-TV reaches more than 1.3 million households in Miami-Dade, Broward and Monroe counties and is broadcast seven days a week in English, Spanish, Creole and French. It can be viewed on AT&T U-Verse (Channel 99) and Comcast (Channel 78).

Previous Emmy wins for MDC-TV include Sustainable Fashion in last year’s Informative/Instructional category and Video Game Concert under the category of Special Events Coverage (Other than News or Sports) in 2017 and 2016.

“It is with a lot of love that we try to highlight all the things the College brings into the community,” Rubalcava said. “This is a team that has been working together for a while. We kind of know everybody’s moves, and everybody performs at a certain level.”

“I grew up with Jackie Gleason,” Aiello said. “Some of the things my family did was sit around the dinner table every Saturday night and watch him from Miami Beach. My uncle even used to play golf with him. So, it’s a part of my past and my childhood and it brought back memories.”

The creation process came with challenges for the crew, such as needing to carefully handle the fragile partitures to prevent damage.

“We had to be very careful with the music because this is a historical music and we actually had to use gloves when handling it,” Bade said. “After we chose [which music to play] we had to scan it, and that’s what we would visually send to the students so they could print their own copies.”

Time was also of the essence.

“Everything we did was in a hurry,” Torrecilla said. “There were a lot of things that we needed to work on for the final product, but I was always positive about it. I was always telling Ariel, ‘We’re gonna win it, we’re gonna make it.’”

The Suncoast Regional Emmys are a chapter of the National Academy of Television Arts & Sciences, which are regarded as the highest achievement for television and media professionals.

“I’m very grateful,” Bade said. “Every time we win an award like this, it feels like a reward for all the hard work, not only for the students but the faculty and staff here at MDC-TV. At Miami Dade College we do some of the best work in our community, so I think it’s great that we received such an award.”