How does one pursue a career as an entertainer? Is there a set path or curriculum that ensures you will get where you want to go? If you were to ask Miami Dade College  students Marilyn Montoto and Fernando Ramos, they would tell you it’s about dedicating your life to your passion, whatever it is, in and out of the classroom.

Both Miami natives, Montoto and Ramos met in 2012, when the two joined a band thanks to an online advertisement.

“It was kind of a scam, but we still performed together and met. But after that, we decided to leave, obviously,” says Montoto, to which Ramos added “it was fun, but it ended up going sour.”

Since then, they have performed together as a dance duo on several occasions, one of them being the Michael Jackson Tribute Performance in Hartford, CT.

Ramos found the contest online, which required them to upload a video of them dancing to any Michael Jackson hit, and the most liked video would be the winner. Their performance of “Thriller”, ended up winning by two votes.

Following their win, the pair was given the opportunity to perform at a show entitled “The Music of Michael Jackson” with the Hartford Symphony Orchestra and James Delisco, a Michael Jackson tribute performer at the Bushnell Center for the Performing Arts. There they performed the song “Beat It.”

They have also performed at BodhiFest in 2013 and this year, at The Rosa Parks Museum in Montgomery, AL, and the National Civil Rights Conference in Meridian, MS.

Both are music business students at Kendall Campus, Ramos focusing on creative production, and Montoto on creative performance. They apply what they are learning at MDC to their projects.

Montoto had gone to college before, and left to pursue a career in a rock band. She then went back to school to study art, another of her passions. Montoto won last year’s “Quest for Peace” first-place award in painting, after being motivated to participate by one of her professors. She, however, eventually went back to studying music.

“I had taken so many music credits already that it didn’t work out that way, and I’m glad it didn’t, because I ended up wanting to do music in the end. So I changed my major, it was originally just voice performance, and I switched it to music business, because I really want to get serious with my music,” she explained.

Ramos began dancing at the age of three, Michael Jackson being a source of inspiration for him from an early start. Ramos would watch his videos and try to emulate his choreographies. He aspires to become both a thorough musician, and a Michael Jackson impersonator.

“He’s always been a huge inspiration for me. That is what I am trying to accomplish with my life. My career right now, and what I have planned for myself, is that I want to be a performer. Not just a dancer, not just a singer, but I want to be an entertainer in every way that I can, that’s what my plan is,” Ramos said.

As for Montoto, dancing was always another source of entertainment for her. After doing martial arts, and then belly dancing, she found a talent in dance, which she explained by saying: “I was really good at it. After that I pretty much did my own thing, because I was always more of a performer and a singer.”

In May, the two hope to perform at this year’s “The 80’s Cruise”, once again interpreting Michael Jackson’s music and dancing.  They also have plans on starting a YouTube channel together, using it as a platform for all of their artistic talents.

Ramos shared his vision for the channel, explaining, “we want it to not only be focused on music but also incorporate dance. We like to have fun, so we do comedy skits too and stuff like that. So, all of that is going to be incorporated into that one big channel.”

After they graduate from MDC, they still are unsure of what they will do, but they know they want to follow their passion.

Ramos explains, “I would like to continue pursuing the career because just in case if anything goes wrong, for example, you always have a plan B. I think that if a project does not go anywhere, I would at least have the fallback of ‘oh you know I have a degree in this, so maybe I can find my way through a record company’, and sort of still be involved in music in every way that I can.”

Montoto then adds, “What we are learning applies to what we do, so it’s a win-win, no matter what.”

Right now they are focused on perfecting their craft, and growing as performers. Montoto says she and Ramos wants to inspire others, and spread Michael Jackson’s message of love and unity.

They both admire not just his talent, but his philanthropy. Ramos believes dedicating oneself to being the best at what they love will improve our world.

“Whatever it is you are doing, regarding the arts, or being in an office, it is important that you do your best, and give it your all,” Ramos said. “That will make others know that you are passionate about it, and your positive energy will radiate and attract people.” 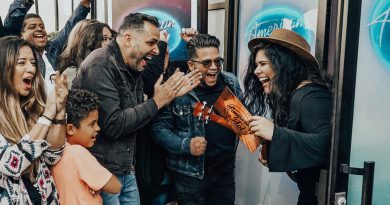