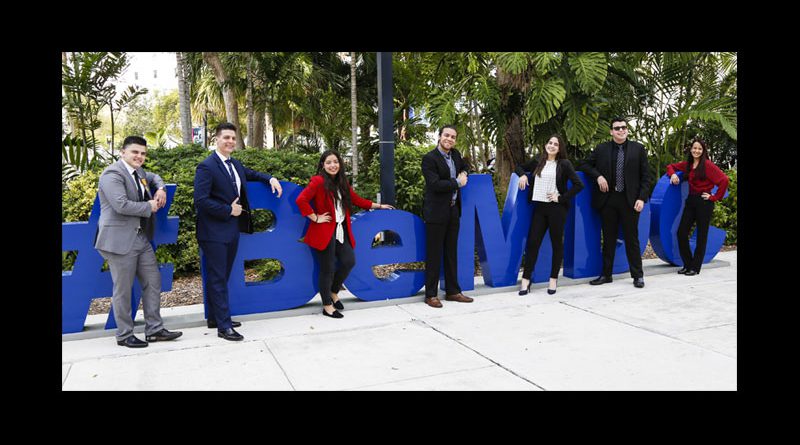 Eligible students must be a sophomore or recent graduate of a community college in the United States. They must be enrolled, for the fall, in a baccalaureate program at an accredited college or university, have a GPA between 3.50 and 4.0, show financial need and have no previous enrollment at a four-year institution.

Each recipient will receive up to $40,000 annually to cover tuition, living expenses, books and any required fees.

Stressed at the idea of paying for college, Neyton Fernandez texted his boss asking for more hours to cover the heavy cost. But that all changed after he won the Jack Kent Cooke Scholarship.

Fernandez,19, immigrated to the U. S. from Granada, Nicaragua at the age of four with his parents and little sister.

A first-generation college student, he didn’t know what he wanted to do after high school.

When he was 10 years old, his mom was hospitalized after having her first nervous breakdown, which shaped his dream of becoming a physician.

“The doctor came out and after weeks of pure stress and worrying, he said ‘Don’t worry everything’s going to be fine.’ to us and after so much sadness you can finally smile because you trust this person,” Fernandez said. “That kind of idea always stuck with me and as I got older, I knew I wanted to do that.”

After high school, Fernandez was accepted to Case Western Reserve University in Ohio, with an almost full ride but his mother’s condition was reoccurring so he declined acceptance. With help from his counselor at Mater Academy East Charter School, he enrolled in the Honors College at Wolfson Campus where he studied biology.

Alejandro Garcia, a first-generation college student, is grateful to have received his bachelor’s degree without placing a burden on his family.

“I’m doing this because of them, it’s the reason my parents came to this country. So, I’m able to do it because of them… to not just chase my dreams but have an education,” Garcia said. “If I weren’t doing it, then I would be doing an injustice to them,”

Garcia, 20, was the Phi Theta Kappa Honor Society president at the Eduardo J. Padrón Campus. He also was the co-chair of the community service initiative On P.A.R. (Prevention, Awareness, and Research) With Cancer at EJP.

Along with receiving the Jack Kent Cooke Scholarship, Garcia was also named to the All-USA Academic Team, the Hites Transfer Scholarship and New Century Transfer Pathway Scholarship making this the second time in PTK history a student wins all three scholarships.

Garcia will attend Princeton University. He plans to pursue a degree in constitutional law before going into politics.

Victor Garnica didn’t take the traditional route to college. He enlisted in the United States Marine Corps after high school, where he served for six years and rose through the ranks, becoming a sergeant at the age of 22. During his time with the Marines, he was a supply administration operation specialist.

During the 2011 Tōhoku earthquake in Japan that triggered a tsunami, Garnica was one of the first to arrive and provide aid. He was later awarded the Humanitarian Service Medal for his help.

Garnica, 28, began studying business administration at Hialeah Campus in 2016. He was president of PTK for two years, founded his own leadership club L.E.A.D. (Leaders Excelling and Achieving Daily) and was a student mentor with MDC Scholars.

He has also been named to the All Florida Academic Team, Guistwhite Scholarship and the PTK Florida Region Sunshine Scholarship.

He plans on earning a master’s in business administration and become a professor in economics. He has been accepted by the UM but is still waiting to hear from Columbia University and the University of Pennsylvania before making a final decision.

Fiorenza Herrera Diaz immigrated to the U.S. with her parents from Chile when she was two years old.

Herrera Diaz, 20, graduated from The Honors College at Wolfson Campus while studying economics.

She was named the 2019 Newman Civic Fellow, served as an Andrew Goodman Vote Everywhere Ambassador and organized a myriad of voter registration and voter education activities. Herrera Diaz was also instrumental in getting two MDC campuses designated as early voting sites for the first time in history.

Herrera Diaz hopes to one day work with the United Nations or the World Bank.

“I would like to help increase economic opportunities in underdeveloped countries to try to improve education and jobs so that they can come out of poverty and have better living standards,” Herrera Diaz said.

Herrera Diaz has been accepted to UM and Wesleyan University. She is still waiting to hear back from Claremont McKenna College, Columbia University, Cornell University, Georgetown University, Occidental College, Pomona College, and Swarthmore College before making her final decision.

When John Lizano was seven years old, he was diagnosed with non-alcoholic fatty liver disease and high blood pressure under the care of nine different specialists. At the time, his parents had just divorced and he was being raised by a single parent and buying organic vegetables was a luxury his family could not afford.

By the age of 15, he weighed 285 pounds and was on the verge of prediabetes. He realized he had to make a change.

Lizano lost about 100 pounds in two years. He cut out dairy and pork, ran five miles a day and went to the gym twice a day. His health problems disappeared.

He skipped his junior year of high school, graduating when he was only 16. He began The Honors College at Kendall Campus at 17 years old where he majored in biology.

At MDC, he attended the Clinton Global Initiative University conference at the University of Chicago where he presented a program to educate the audience about diabetes prevention and awareness.

Lizano, who is currently 18, also founded Sweeter Than Sugar, a non-profit initiative that brings awareness and prevention of type 2 diabetes to low-income children in South Florida, specifically Miami.

He aspires to be an endocrinologist specializing in type 2 diabetes prevention and treatment while also researching health inequality in low-income communities.

Lizano will be attending Georgetown University in the fall and pursue a global health degree on a pre-med track.

English wasn’t Clarisel Lozano’s first language, but that didn’t stop her. She immigrated to the United States in 2014, with her parents and sister from Havana, Cuba.

Lozano,19, is a recent graduate of Kendall Campus’ Honors College where she studied biology.

Her grades have earned her a spot on the Dean’s list every semester since the fall of 2017. Lozano served as the vice president of communication for PTK.

“This is something I never imagined and I’m super grateful for,” Lozano said. “This scholarship means a lot. I think it’s just that we can show not just to my parents and other people you know, but to many other immigrants that it doesn’t matter if you get this scholarship or not, there are so many other opportunities available to you.”

She plans to become a cardiothoracic surgeon and would like to continue working in cancer research.

Lozano will be attending UNC-Chapel Hill in the fall.

Yeniselis Morales grew up in Holguin, Cuba. Morales spent most of the early years of her childhood in and out of hospitals because of her asthma. Due to the lack of resources, there were only three aerosol machines in the whole city.

When she was 12 years old, she arrived in Miami. She didn’t speak English and was unable to maintain the same pace as her classmates. But she remained resilient, giving her studies twice the effort her fellow classmates would. She ultimately picked The Honors College at North Campus where she majored in biology.

Morales, 19, is the co-founder and president of the Doctors Without Borders MDC Student chapter at North Campus. She was also a member of PTK and Tri-Beta honor societies and the Minority Association of Pre-Health Students and STEM Ambassador.

“Honestly I cried when they announced [the Jack Kent Cooke winners]. It’s the biggest achievement I have ever made so far, more than my family could ever dream of,” Morales said. “It gives me the opportunity to actually pursue higher education and I’m grateful for that.”

She has always had a passion for children and the cardiovascular system, hoping to one day become a pediatric cardiothoracic surgeon.

Morales will be attending the University of Michigan- Ann Arbor where she will be majoring in molecular biology.