On Sept. 9, MDC Live Arts launched the Live Arts Lab in building 1000 at Wolfson Campus during Downtown Art Days.The event was free and open to the public and included performances by local artists with ties to the cultural institution, like dancer Pioneer Winter, musical-poet Oscar Fuentes, and multidisciplinary artists David Rohn and Danilo de la Torre. Afterwards, attendees were graced with DJ music and some intermixing in and around the theatre.

Newly relocated, MDC Live Arts will now govern the theatre space at Wolfson Campus. Prior to the move, Teatro Prometeo called the 120-seat theatre home for 40 years, according to Artistic Director Joann Maria Yarrow. MDC’s Teatro Prometeo has now moved to the Koubek Center located at 2705 S.W. 3rd St., in the heart of Little Havana.

The Live Arts Lab will serve as a spark for the continuing revolution of arts offered by Miami Dade College.

“We are not replacing any programs or anything, just now managing new space and the theatre,” MDC Live Arts Marketing Manager, Alexa Burneikis said. “The move was something that was in progress this summer and is currently in place.”

Yarrow, who has directed at Teatro Prometeo for 10 years, believes the move was made because of the immense growth of the arts in Miami. She also said the change of space was beneficial for their program.

“Everything happened organically. We were already working on some projects for the kids program at the Koubek Center, and all of our students love coming over to the center,” Yarrow said.

MDC Live Arts was launched in 1990 as Cultura Lobo Del Lobo, with a renowned history of bringing national and international artists to the South Florida community. It is recognized nationwide for providing an essential platform for the performing arts. The Live Arts Lab will continue this legacy with their lineup of programs showcasing artists from all over the world to local MDC students.

On the agenda is a performance by award winning dancer/choreographer Nora Chipaumire called Portrait Of Myself As My Father that will take place on Oct. 14 and Oct.15 at 8 p.m.

The performance will be both an observation and commentary on the issues of masculinity within the black-African male community all while enclosed inside of a boxing ring.

The New York Times has called the show “…a no-holds-barred look at masculinity in African culture and the African male body in American culture.”

The event will take place at Matt Baiamontes’ Boxing Club located at 222 N.W. 27th St. in Wynwood. Miami Dade College students receive a discounted ticket price of $10 with the presentation of a valid school ID.

The Lab will also regularly host activities like Lab Chats, The Test Lab and Live Arts Lab Alliance (LALA) all designed to provide platforms for local artists and students to explore, perform and engage with the community on various artistic projects.

For a complete listing of programs and events, visit the MDC Live Arts website at http://mdclivearts.org/ 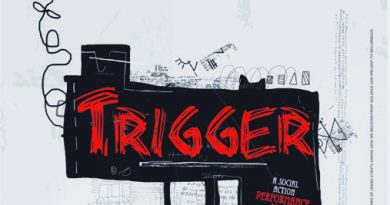