A man accused of robbing a Miami Dade College Kendall Campus student at gunpoint and temporarily abducting her—more than six months ago— has been arrested.

Dmitriy Sergunin, 35, was apprehended on Oct. 27, according to an arrest warrant. He is charged with kidnapping with a firearm, armed robbery and burglary with assault.

Sergunin is being held at the Turner Guilford Knight Correctional Center. No bond has been set.

“We take these incidents extremely seriously,” said Juan Mendieta, the College’s Director of Communications. “As a result, we have reviewed our security procedures to address these type of situations. We are pleased the alleged culprit has been arrested.”

The kidnapping occurred on April 28 at Kendall Campus. The victim, Samantha Valdes, 20, was entering her car in parking garage L at approximately 10:30 a.m. when Sergunin forced himself into Valdes’ vehicle while holding a gun, according to police.

Sergunin then demanded that Valdes drive to her bank’s ATM and withdraw money from her account. He then told her to drive him back to the campus where he exited the car. Valdes was not injured during the incident.

The garage is not equipped with surveillance cameras on its premises.

The Miami-Dade Police Department Robbery Bureau had been on the lookout for Sergunin since the incident in April. He has had several run-ins with police, including being arrested on charges of possession of cocaine, petit theft, loitering and prowling, according to court records obtained from the Miami-Dade County Criminal Justice database.

According to data from the Clery Act Crime Statistics Report published by the College, there were three robberies and six burglaries committed at the Kendall Campus from 2013-2015 cycle.

Mendieta reminded students to remain vigilant of their surroundings while on campus and to report suspicious activities to the authorities. Students can also request a public safety escort if they feel unsafe.

“We are committed to protecting our open and welcoming campuses to ensure that students and employees enjoy a safe learning and working environment,” Mendieta said

Brayan Vazquez, 20, is computer science and computer network major at North Campus. Vazquez will serve as a forum writer and photographer for The Reporter during the 2014-2015 school year. He aspires to be a tech-based entrepreneur and revolutionize the way kids learn in this new technological era. 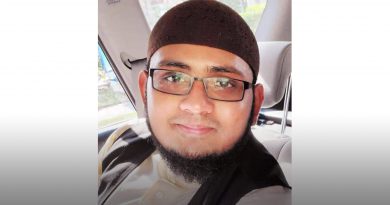 Waiting For Lefty To Be Performed At Kendall Campus