Theodore Karantsalis is an extreme gardener. His suburban Miami Springs house on a third-of-an-acre looks typically trim in the front. But the backyard is packed with more than 200 plants, 50 trees, two eight-by-six foot greenhouses and a homemade treehouse with WiFi.

The work all goes toward feeding his vegan lifestyle that grew out of a health condition and a concern for chemicals in our food.

“There’s a difference between eating produce bought from the store and picking leaves from the vine and eating it then and there,”  Karantsalis said. “The difference in taste, freshness and a lack of hormones and pesticides.”

The 55-year-old works on his garden everyday. He spends 20 hours a week there. The bulk of his hours are dedicated to Saturdays, when he pulls an eight hour shift.

At his day job, Karantsalis is surrounded by books and ideas as Miami Dade College North Campus Associate Director of Learning Resources. In that role, he supervises the maintenance and inventory of library equipment, materials and instructional resources as well as plans training sessions for library staff.

Karantsalis is drawn to knowledge. He has studied at seven colleges and universities, on the west and east coasts, collecting associate’s, bachelor’s and master’s degrees in liberal arts, library and information science, law enforcement training and Spanish literature. But he has never been afraid to get his hands dirty.

He was born and raised in Alameda Island, California to parents of Greek descent. During Karantsalis’ childhood in the San Francisco area, his neighbors from Guyana, China and India gave him a taste for food from around the world.

“It was interesting growing up, being surrounded by my next door neighbors from India, cooking curry and garam masala vegetable stews with heavy spices,” Karantsalis said “You could smell their foods a block away.”

Those neighbors taught Karantsalis how to grow bok choy and taught him how to garden and cook fresh foods. In 1983, in his 20s, he moved half-an-hour north to Berkeley, where he worked at a junk yard and was influenced by the social climate of the Woodstock era.

That is when he heard the Crosby, Stills and Nash cover of Joni Mitchell’s song “Woodstock” and was influenced by the lyric: “Got to get back to the land, and set my soul free,” which eventually led him to start his own garden in the late 1990s.

In April of 1995, Karantsalis moved to Miami to be with his wife, Diana Karantsalis.

Karantsalis was diagnosed with multiple sclerosis, a disease that affects nerves in the central nervous system causing bodily dysfunctions, in 1999. His condition also impairs his ability to process certain foods. It affects his vision, speech, motor skills and creates numbness and fatigue to his nervous system.

“After seeing spots and collapsing in 2002, I was placed in the Intensive Care Unit for two days at South Miami Hospital,” said Karantsalis, who credits successfully managing his disease by changing his diet to natural organic foods.” I could barely get out of bed.”

He was prescribed Avonex, an anti-inflammatory medication used to treat multiple sclerosis, but it did not help. After taking Avonex for five years, he looked into more natural treatments and changed his diet to a vegan one. Since then, he has not eaten meat and stays away from animal byproducts.

Nine years ago he started cultivating his home’s backyard space, growing vegetables, fruits and herbs. He calls the space his “spiritual” garden. It is filled with composters, a potting station, garden beds and various trellises for plants to grow on.

“Because of this natural diet, my symptoms are manageable, and I haven’t seen my neurologist in seven years,” Karantsalis said, “I have not had any relapses during this time.”

Karantsalis isn’t alone on his journey. His wife, Diana, and his kids Demos, 19, and Spiros, 17, also transitioned to a vegan diet three years ago. They don’t eat any processed foods, chemicals or Genetically Modified Organisms and grow most of what they eat. Their garden of vegetables and fruits are mostly Asian, Indian and Middle Eastern varieties. There are families of spinach, 200 turmeric and ginger plants, berries, bananas, dragonfruit, 50 moringa trees, kale, figs, coffee and broccoli sprouts. They don’t drink tap or bottled water, sticking to only water filtered by a custom distiller.

“The vegan lifestyle has brought our family closer together as we are always working outside in our garden,” said Diana Karantsalis, his wife of 22 years. “As Theo likes to say, ‘the family that grows together, stays together.’”

Instead of using chemical based products, Karantsalis and his family use essential oils to make their own toothpaste, deodorant, shampoos and soaps. He recently made soap from hemp and peppermint leaves.

Karantsalis eats 10 to 15 bananas a day and picks turmeric roots to use for teas. The actual turmeric, when coming into contact with skin, turns skin yellow.  During a recent interview conducted by The Reporter, Karantsalis ate a fruit salad made of bananas, organic blueberries, nuts, seeds and oats, and showed his highlighter yellow hands and described the many ways he uses all the produce he grows.

“I’m always a shade of orange,” Karantsalis said. “It’s come to the point that my colleagues are already used to it, so they tell me when I’m very orange to cut down my turmeric, carrot and yam intake.”

A FOCUS ON JUSTICE AND INFORMATION

Karantsalis’ other pursuit and passion is journalism. He has freelanced for the Miami Herald Neighbors section since 2008, producing more than 700 articles for the publication. He covers Miami Springs and Liberty City and sometimes investigates ongoing cases at City Hall.

“I write for the reader, the public,”  Karantsalis said. “They need to know what’s happening in the community.”

Since 2015, Karantsalis has also volunteered as a researcher and cataloguer for medical journals at Nutrition Facts, an organization that provides information about advances in the nutritional field as well as health research in an effort to bring nutritional awareness to the public.

Karantsalis hopes to teach in the community about healthy diets and aspires to own a farm where he can grow and sell powdered spices and natural medicines.

For now, Karantsalis reaches out to those around him. He gave his colleague Sara Alegría, the associate director of Learning Resources at West Campus, a moringa tree, a medicinal plant used in Indian culture, and a turmeric plant, a root used in Indian culture for its antioxidant and anti-inflammatory properties. She credits Karantsalis with improving her eating habits.

“Theo is very knowledgeable about plants with medicinal values,” Alegría said. “He takes it a step further by growing a lot of what he eats.”

He pushed his boss, Estrella Iglesias, campus director of Learning Resources at North Campus, to ditch red meats. He also brings her herbs from his garden.

“Without an advocate like him, I’m not sure I would have been able to transition to a plant based diet,” said Nicholas Kyriakides, a teacher in the Business Department at North Campus. ”Personally, I feel great and very thankful for his expertise and passion.” 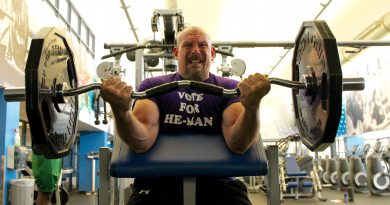