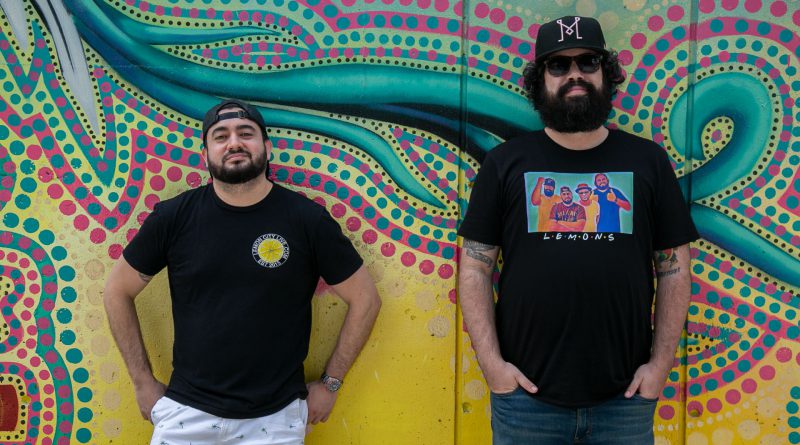 Gustavo Chacon and Edwin Garcia have always been passionate about sports.

They met playing soccer in a recreational league at the Kendall Soccer Park nine years ago and have watched and attended hundreds of sporting events together.

So when the duo couldn’t find a sports media outlet that went beyond announcers in suits spitting out stats, they launched their own show.

The Miami Dade College alumni created the Lemon City Live Podcast in 2015 with a friend who is no longer associated with the program. Since then, they have aired 240 episodes on platforms like Soundcloud, Spotify, Apple Podcasts, Google Play and YouTube.

“For me, the way everything was happening with sports radio in South Florida was kind of boring, to be honest,” said Garcia, 38, who is known on the show as Larry Fresh. “I wanted to provide a different avenue for people to find something new, find something interesting and not be told: ‘this is what’s good, this is what’s bad.’”

Today, the Lemon City Live brand has morphed into a full-fledged website augmented by articles, videos, two other podcasts, and a 15-member crew of writers and photographers.

“Our goal is to be so self-sufficient to the point where we can grow and it’s our full-time job,” said the 36-year-old Chacon, who goes by the moniker ProDoucher FunGus on the show.

Garcia and Chacon started their quest toward stardom in 2013 when they created a blog with articles written from a fan’s perspective. However, it stalled in less than a year.

But in 2015, after Garcia took a digital media class at Florida International University, the podcast became a reality.

Shortly after, they met at Garcia’s apartment in Little Haiti and began recording using a MacBook. They released the first episode, which lasted about 47 minutes, on Soundcloud that October.

The show didn’t have an official name at the time. Then after noticing that Instagram marked their location on posts as Lemon City—Little Haiti’s former name—they adopted the title for their podcast.

“I told the guys: ‘The area that I live in is called Lemon City. Why don’t we try to make that our own since here is where everything started?,’” said Garcia, who earned an associate’s degree from Wolfson Campus in 2015 and a bachelor’s from FIU in digital media studies in 2017. “The first thing people do is always ask us: ‘What’s Lemon City Live?’ It’s a perfect conversation starter.”

For a few weeks, the production of the show was amateurish. However, the quality improved after they started using Ableton Live (a digital audio software), XLR microphones, an audio mixer and other peripherals such as tablets and laptops.

In May 2016, five months after they launched the website, they were granted access to cover the Miami FC, a United Soccer League Championship club, and the now-defunct soccer team the Fort Lauderdale Strikers.

That gave them the experience they needed to get press credentials to cover the University of Miami and FIU’s football programs, and eventually almost every professional team in the city.

Now, their multimedia content includes articles about local teams—like the Miami Dolphins, Inter Miami CF, the Florida Panthers and Miami Marlins—and events such as the Miami Open and the International Champions Cup.

Lemon City Live now has more than 15 thousand followers on Instagram and they refer to their supporters as Lemon Heads.

“I wanted people that have been a part of the fabric of this community, people that are tied to this community,” said Orlando Alzugaray, the station manager at Onside Radio. “These guys have been covering South Florida over the past few years and are all born and raised here. They’re local guys and have a passion for the local schools.”

In addition to Chacon and Garcia, Lemon City Live’s lineup features a few other local personalities.

Tanard Davis, who earned a Super Bowl ring with the Indianapolis Colts in 2007, joined the podcast in 2018. Davis is currently a player for Magic City Jai-Alai (which sponsors Lemon City Live).

Achilles Carmenate, who met the crew in 2016 while working as a team administrator for Miami FC, became a co-host for the podcast and radio show this past summer after appearing as a guest on several episodes.

“We are not losing focus on what got us to this point,” said Chacon, who obtained a bachelor’s degree in business management from Kendall Campus in 2011 and a master’s in business administration from FIU in 2014. “We’re still gonna cover all the teams. We’re still gonna write kick-ass articles. We’re still gonna do our podcast the way we’ve always done, which is that passionate sports fan approach that we like to take.”