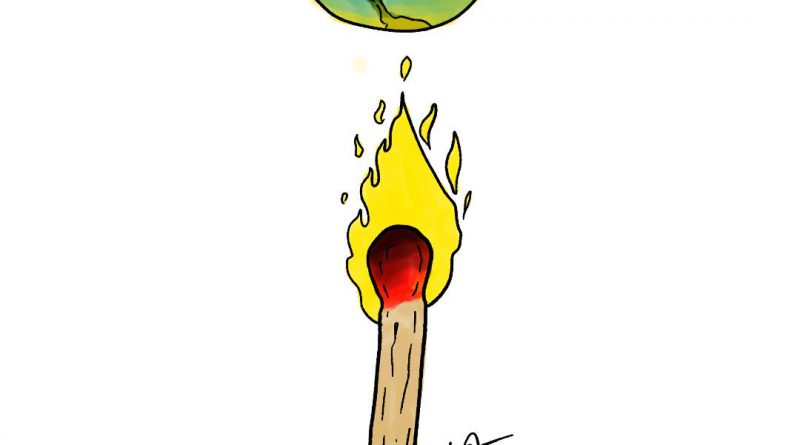 The evening of Nov. 4 was the first day that the Trump administration could back out of the Paris Agreement with a year’s notice. A week prior, scientists forewarned the importance of cutting CO2 emissions in half by 2023 as vital to preventing catastrophic weather reactions and irreversible results.

However, the Trump administration turned in the notice immediately. With CO2 levels reaching an all-time high late last year, our actions toward some sort of  solution is one that cannot wait. The United States and China are one of the world’s largest CO2 emitters, with the U.S. producing 15% and China producing 30% of 2017’s global carbon emissions.

Without the U.S.’s involvement in the agreement, countries like China and India will weaken their efforts to stay within the regulation lines stated in the agreement. China’s involvement in the Paris Agreement was motivated by a mutual collaboration between numerous nations, the participation of all super powers and the ability to create the financial means necessary in order to implement the use of eco-friendly devices.

With global warming being a reality that surrounds us every day, America should be involved in the Paris Environmental Agreement.

Global warming affects our communities. Residents of drier areas of the U.S. have experienced more intense wildfires as the weather has become more severe. According to National Public Radio, the catastrophic fires in California have increased in the past few years. The Paris Agreement plans to keep the average global temperature at or below 2°C from the current temperature.

This can only be done through the significant reduction of CO2 emissions. According to NASA, the ocean’s temperature has risen more than 0.4°F in the last fifty years. The combination of rapidly rising sea-levels and the increasing potency of the sun are a lethal duo causing significant melting of ice caps. Communities living near bodies of water have reported an increase in floods and high tides. This will cause rainfall to increase and discourse between the hot and cold air to amplify. This is exemplified by the typhoon that occurred in Japan earlier in 2019 and Hurricane Dorian that devastated the Florida Keys.

Our participation in the treaty alongside other nations involved will alleviate the environmental impacts caused by CO2 emissions and provide other environmental and economic benefits. One example would be creating business for Americans. Before the U.S.’s dissolution from the

Paris Agreement, the International Energy Agency predicted that the global clean energy market would have been $60 trillion—not to mention the vast reduction of CO2 emissions which would protect our beautiful land, homes and businesses from destruction caused by climate change.

Our continued involvement in the Paris Agreement can help us take the initiative we need to fix many environmental problems. In the words of Rachel Carson, “man is a part of nature, and his war against nature is inevitably a war against himself.”