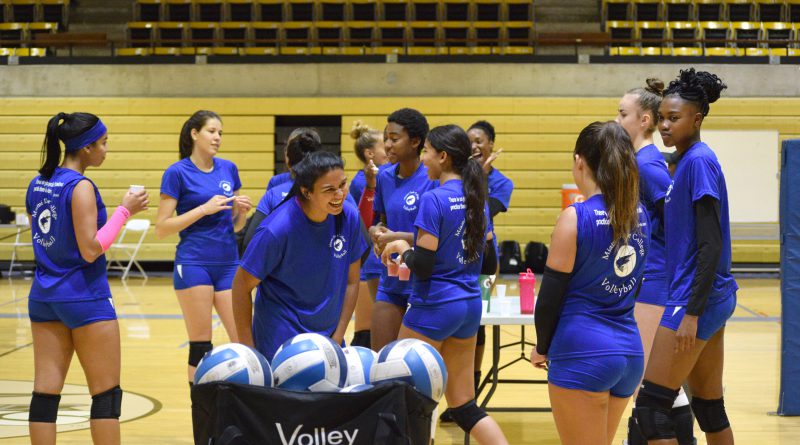 More Than A Team: Off to a hot start, this year's Lady Sharks volleyball team hopes to capitalize on their success and continue building their chemistry. For new teams, what happens during practices and off the court can make the difference between ending there season with a championship or a disappointment.
SEAN MOW/THE REPORTER
News Sports
September 14, 2018July 21, 2020 Christian Ortega Kendall Campus, Volleyball, Women's Volleyball

The Lady Sharks have opened the season 8-0—losing only five sets—to extend their win streak to 42 games—the team’s last loss was on Oct. 25, 2016 to Palm State College.

The team, despite still trying to improve their chemistry, has put together an excellent string of performances, including defeating third-ranked (now second) Iowa Western Community College 3-0.

“The team has put together a lot of great games and shown how tough they are,” head coach Kiko Benoit said. “They’ve shown the necessary toughness to keep their heads straight and dig themselves out of a hole when games get tough.”

Against Polk State, the Lady Sharks won the deciding set 15-6 after splitting the previous four.

They have improved in other areas as well. What was at one point the team’s largest weakness—their chemistry—has slowly improved.

“Even though we all come from different backgrounds and countries, we’re becoming more like a family and getting closer,” outside hitter Valeria Alegrias said.

Throughout their practices, each scrimmage has the intensity of a live game. With each point scored, the girls cheer each other on to help maintain the momentum. When one side loses though, they have to go through conditioning drills. It’s Benoit’s way of keeping the girls focused.

“We always cheer after we score,” sophomore setter Tiziana Baumrukova said. “It helps keep our heads down and allows us to get rid of all the nerves we may have, whether it’s in practice or an opponent.”

In the midst of the success, the team realizes the need to stay in the moment and not look ahead.

“I don’t think about the last game,” Baumrukova said. “I keep focusing on the game we have now. We don’t focus on keeping the streak alive, just winning.”

Though the season is still young, the sophomores have stepped up their leadership both on and off the court.

Alegrias, who’s 44th in the nation in kills (82), though quiet, has been a steady force on the team.

“I feel like I’ve gained a lot in experience,” she said. “I’ve been working on new ideas to improve my game and I’ve been trying what I can to correct myself from a coach’s point of view.”

Baumrukova, who’s ranked in the top ten in both assists and assists per set (304 and 10.86 respectively), credits her time in the summer playing for the Czech National team as part of her continued growth.

However, the Lady Sharks know they have to continue improving if they want to win a third-straight national title.

Though they’re ranked third in digs per set with 20.93 and are top ten in most offensive categories, they’re in the middle of the pack when it comes to total attacks, blocks per set and points.

“We’ve been playing more as a team,” Benoit said. “Chemistry is something that takes time to develop but every day we’re getting better.”

The Lady Sharks next game is on the road versus Broward College on Sept. 19. at  6 p.m.

Graffiti And Sticker Vandals Causing A Nuisance At Kendall Campus 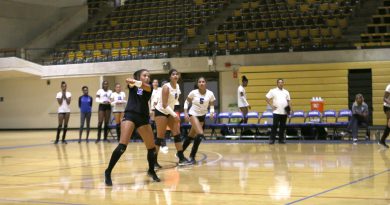 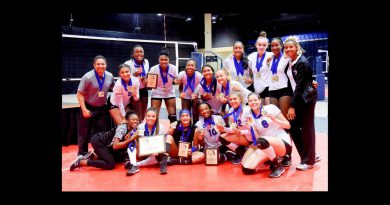