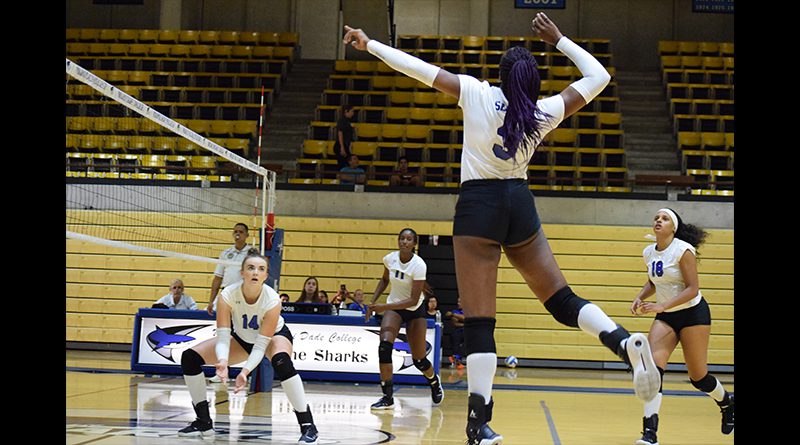 Soaring High: Outside hitter Scherine Dahoue gets ready to spike a ball in a game earlier this season. The Sharks have been crowned Southern Conference champions for the third straight year, earning them a trip to the State Tournament in Jacksonville from Nov. 1-3.
SEAN MOW/THE REPORTER
Sports
October 18, 2019October 18, 2019 Jose Tovar

For the third straight year, the Lady Sharks volleyball team has been crowned Southern Conference Champions.

“They played well. It was an important match that gave us a direct ticket to the State Tournament so we don’t have to go to the playoffs to make it,” head coach Origenes “Kiko” Benoit said. “That’s always good, we have extra days of rest and practice and I think they played really well.”

Miami Dade College, ranked forth in the nation and second in Florida behind undefeated Polk State College, is 19-3 and 6-0 in conference play.

De la Rosa is having a breakout season with 788 assists and 170 digs in 75 sets. The setter is ranked seventh in assists per set (10.51) in the National Junior College Athletic Association.

Pimentel has contributed 392 digs and is averaging 5.37 digs per set.

But the team’s success hasn’t come without obstacles. During the second half of the season, the Lady Sharks have struggled with communication and passing at times.

“We are working, like I said, on our weaknesses which are passing and communication and we are getting stronger in what we know what we do best, receiving and blocking,” Benoit said. “I work with them mentally as well because even though volleyball is physical in a way, this is also a very mental game.”

The team has also had their share of big wins. They have beaten the defending national champions, the College of Southern Idaho and several top-ranked teams such as Snow College, Salt Lake Community College and Utah State Eastern.

The team credits their camaraderie for their success.

“We’re together all the time. It doesn’t matter if you’re losing or winning. We try to stay together no matter the situation,” said middle blocker Kimberlie Apolinario. “I think that is a very good point for us to have.”

Although the team has not been as dominant this season as in previous years, they still are among the national leaders in several statistical categories.

“The players are very coachable, they are working very hard, and they have a goal which is to make it all the way,” Benoit said. “When you have something that you want to follow and want to get, they will go for it, and they’ve been working for that goal. That’s only one step. We still have three more [wins] to go.”