Winners will be announced Nov. 19 in Las Vegas.

Calle has been nominated for three other Latin Grammy Awards. In 2005, he was nominated for his cover song “Ed Calle Plays Santana,” again in 2007 for “In the Zone,” and most recently in 2014  with PALO! .

“It’s a great musical experience,” Calle said about his work with PALO!. “I have the freedom to experiment a lot with what I can do musically.”

His passion for music is rich. He is known as one of the most recorded saxophone players in history even though you will never catch him bragging about it. Calle is truly a lighthearted man that can care less about the fact that he has traveled the world, played with renowned musicians such as Gloria Estefan and Michael Bolton, has multiple Grammy nominations, or has his own band.

Calle teaches music business, but at times wishes he could also teach the art of music as well.

“It’s your responsibility to create your own voice,” Calle said. “Practice and defining your voice is just as important as understanding the business side of things.”

His advice to young musicians is to be original, do what you love, define your voice, and understand where the money in music is going.

“You have to be a multitasking musician nowadays,” Calle said. “A lot of musicians teach and there are many outlets to sell music that most young people don’t think about.”

So where does all this drive and passion come from?

“Someone’s got to train the next level of musicians,” Calle said. 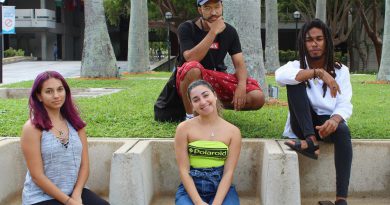 Making A Difference Through Photography