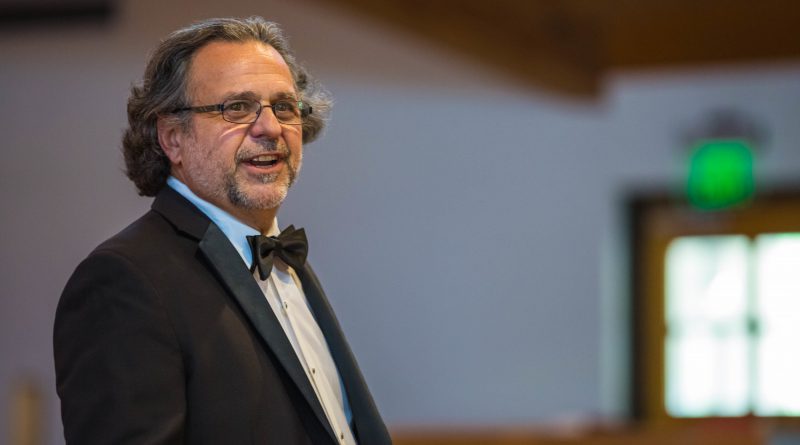 Musical Icon: After 32 years at Miami Dade College, Kenneth Boos is set to officially retire at the end of November. He plans to spend his retirement with family and friends and wants to start a choir for educators who don’t have time to pursue singing full time.
PHOTO COURTESY OF MIAMI DADE COLLEGE
News
November 16, 2018July 13, 2020 Teresa Schuster Kendall Campus, Music, Retired Staff, retirement

When he started college, Kenneth Boos didn’t plan on a career in academia. He said no to teaching and even wrote an essay to show how adamant he was about not being a college administrator.

After 32 years at Miami Dade College, he’s done both.

Boos, 67, will officially retire from Miami Dade College at the end of November. He taught his last class this past summer.

“Being at Miami Dade College has just been spectacular,” Boos said. “The energy that’s there, the enthusiasm, the ability of the students, and the talent of the faculty, is just amazing.”

After receiving a doctorate degree in choral conducting from the University of Miami, Boos became a professor at MDC in 1986, teaching choir and music theory. The next year, there was an opening to be the chair of the music, drama, and dance department at North Campus. He applied and got the gig.

“I didn’t really want to do it,” he said. “But, as I looked around, I saw a chance to build something that would benefit our students, and the faculty, and the college as a whole.”

After 11 years as chair, he became the associate dean of the School of Arts and Letters at North Campus. Boos said that when deciding whether to accept the administrative position, he wrote a list of pros and cons for each. A couple of years ago, he found both lists.

After 18 years as an administratrator, Boos returned to teaching at Kendall Campus in 2005.

But it all ties back to music. The art form has always been a large part of his life.

“In my house growing up, 18 hours a day, there was music playing somewhere,” Boos said. “In high school, my favorite thing to do was to sing in choir.”

Boos originally planned a career as a singer, but after a few years of college he realized what he really wanted to do was teach singers. Teaching came naturally to him and he wanted to help singers use their voices properly.

“Being a teacher is who I am,” Boos said.

In 1995, Boos was selected as an endowed teaching chair by the College, which selects faculty members based on their excellence in teaching.

Kendall Campus President Beverly Moore-Garcia described Boos as a laid-back, down-to-earth person, who goes above and beyond in and out of the classroom.

“He knew his students as real people,” Moore-Garcia said. “If you were good at something, he made you better. If you were weak in something, he supported you until you got better. He always believed in you.”

Boos plans to spend his retirement playing tennis, traveling and spending time with his grandchildren. He also hopes to start a new choir for people trained as singers, like teachers, who don’t get to spend much time singing.

“We’re going to do some music that other people aren’t doing right now,” Boos said.