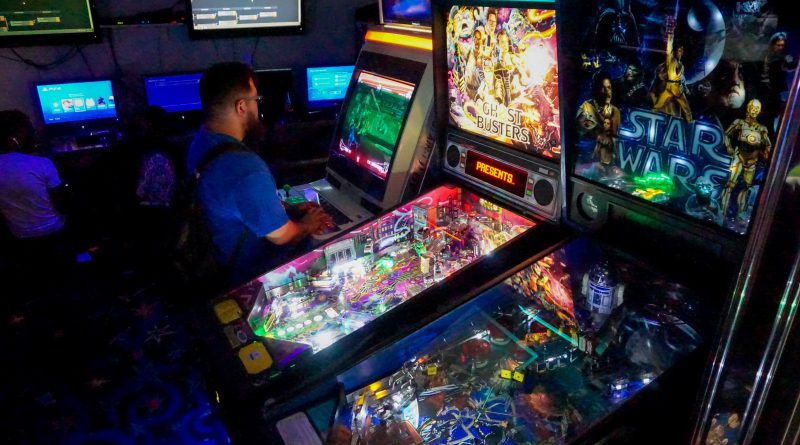 The blinking lights of a Killer Instinct arcade machine blare as the X-Men machine across from it repeats the same demo animation. Awaiting quarters, rows and rows of games sit idly, illuminating a dark room full of teens socializing.

Arcade Odyssey has remained a popular mainstay in Kendall, providing patrons with hours upon hours of digital entertainment.

Located at 12045 S.W .117th Ave., the arcade was founded in 2011 by avid video game collector Rick Medina. Its popularity has been seen as a bonus for the video game community.

“I guess you can say I’ve been collecting games for over 25 years…I was always captivated by them, and I was also captivated by the technology behind them. It was a natural step to go from the collection to an arcade,” Medina said in an interview with Groupon.

Aside from the assortment of games old and new, there are also competitions.

Andrew Quintero has been competing in the biweekly Street Fighter V tournaments.

“I was never a big player of fighting games. I got into them when I went into college,” said 31-year-old Quintero. Failure proved informative for Quintero, who said he only got better after losing to better players and mimicking them.

His competitive nature started with the release of the popular Capcom VS SNK 2.  He is usually accompanied at Arcade Odyssey by his friend, 31-year-old Peter Castillo.

“This arcade has been here for a long time, as far as I remember,” Castillo said. “I’m usually here every two weeks to compete.”

Street Fighter V is the most recent installment in the popular fighting series, and despite its mixed initial reception from fans and critics, has been popular among the tournament scene.

Every week, the arcade hosts a different tournament, with every other week either being Street Fighter V or the popular racing game, Initial D.

The arcade also attracts those not interested in competing.

“I’m not a fan of tournaments nor never really joined one, but it’s cool seeing people coming together and connecting based on on common thing,” said nineteen-year-old Kameron Salehi.

The mechanical engineer appreciates the arcade, and sees it as way to preserve some gaming history.

“I do like the arcade,” Salehi said. “I’m not a full fan of Street Fighter but I mostly go there for pinball, Crazy Taxi, House of the Dead, Galaga, and Initial D.”

“It gives people access to old school games as well as providing a sense of community within the arcade, since it’s a social setting,” Santalis, a psychology major said.

That sense of community is important for the competitive scene.

“Everyone who comes here every two weeks for Street Fighter knows each other and it’s nice,” Castillo said. “Those who are new are welcomed to come by whenever.”