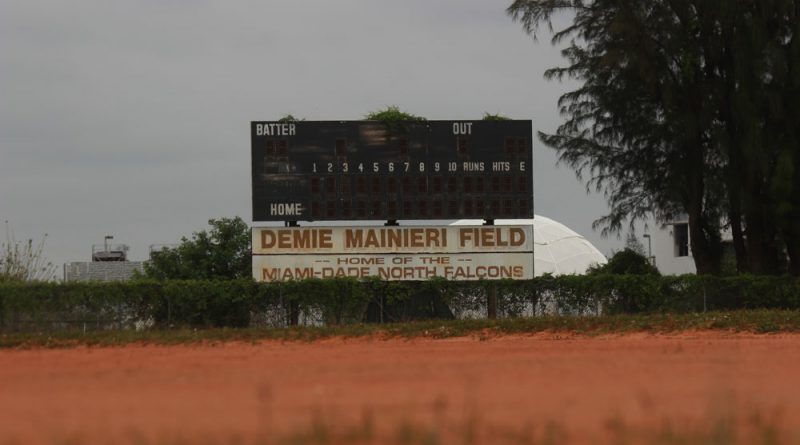 For more than thirty years, the North Campus baseball field was home to the greatest coach in the history of Miami Dade College.

Demie Mainieri, who served as head baseball coach from 1960 to 1990, compiled a resume that stands the test of time. He passed away this past March.

Mainieri was the first coach in collegiate baseball history to amass more than 1,000 career wins. He appeared in four national championships—winning one in 1964. His accomplishments earned him a ticket into seven Hall of Fames.

As a result, Demie Mainieri Field was dedicated in his honor in 1989. It was his sanctuary, the clay diamond that cemented his legacy as one of the region’s greatest coaches. He nurtured the careers of hundreds of young athletes.

According to a 1990 Miami Herald article,  222 North Campus players were selected in the Major League Baseball draft between 1965 and 1989. That is more than any college in the country during that period.

At least 30 of Mainieri’s players made the Major Leagues. They include Bucky Dent, Randy Bush, Mickey Rivers, Warren Cromartie and Mike Piazza—the greatest hitting catcher in MLB history. Mainieri’s standards were so demanding that Hall of Fame pitcher Steve Carlton was unable to make the team’s roster in 1964.

However, Demie Mainieri Field is now a forgotten oasis. North Campus’ baseball team was shut down in 1997 when the College cut funding for several athletic programs, consolidating the remaining few to Kendall Campus.

“I’m very upset,” Mainieri said in a 2014 Herald article when he made his return to celebrate the 50th anniversary of his national championship. “I got into coaching to help young people. But [the vacant field] is not serving the needs of the community.”

The field was last used as a baseball camp in 2014, according to Fermin Vazquez, senior director of campus administration at North Campus.

According to Vasquez, the field’s grass is routinely cut, however, the infield’s ground feels like a concrete floor slowly being overrun by weeds. One dugout has a tree sprouting from its roof. The turf that once covered the outfield is now littered with holes and crabgrass. Vines and other vegetation have inhabited the outfield fence and scoreboard.

In its current condition, any player bold enough to play on the terrain could face ankle injuries or a torn anterior cruciate ligament.

“It’s hard to put into words the feelings of sitting and imagining your life’s work was put into something and then somebody decided to wish it away,” said Paul Mainieri, Demie’s son and a national championship-winning coach at Louisiana State University. “I was hoping that the field was going to continue to be used by Miami and you can see baseball prosper at the grassroots level.”

Vazquez said the Campus has considered renting the field to local teams, but he has not received interest. North Campus currently rents out its pool to several local teams that practice and compete there, but the conditions of both facilities are incomparable.

There is no impetus for members of the baseball community to use the facility in its present condition. It’s like owning a home that has been ravaged by a hurricane, but the homeowner ignores the damages and then wonders why there is a lack of interest from renters.

To immortalize the field, the College could consider an alumni game featuring Mainieri’s former players so they can relive their glory days.

Additionally, the athletic department, whose responsibilities include coordinating athletic events sponsored by the college, could conduct training sessions for the community surrounding North Campus to revive America’s pastime.

Though Kendall Campus has its own well-groomed field, it’s more than 20 miles away from North Campus. Demie Mainieri Field could help fill the void in the community.

There are a wealth of possibilities to explore, but a feasible solution requires a commitment from the College–a school that prides itself on enriching its community.

However, the bare minimum won’t cut it. No one is knocking on their door. What do you expect when you don’t try?

You Better Watch Out, Santa Is Coming To North Campus