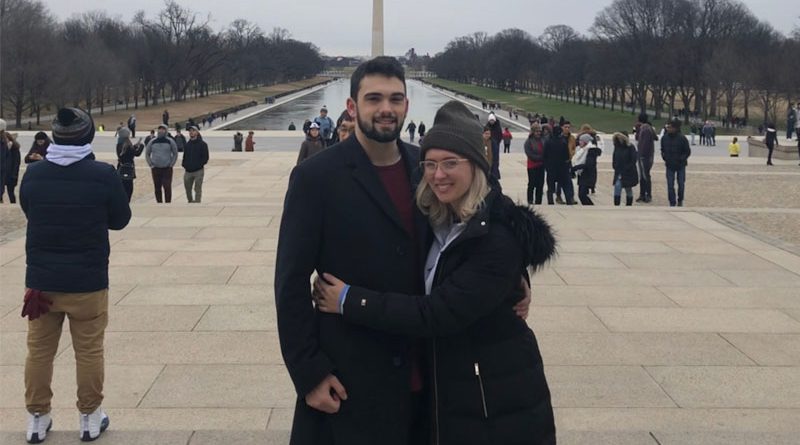 Shoopman and Jack Onoforio, a political science major at Quinnipiac University, were not injured during the incident. They were attending The Washington Center’s Inside Washington Seminar where students evaluate political, media and cultural landscapes leading into the upcoming presidential elections. The seminar ran from Jan. 6 to Jan. 12.

Miami Dade College has been sending Honors College students and SGA leaders to the Washington Center since 2004.

The students were returning to their residential halls provided by the Center, after having dinner, in the NoMa neighborhood. They had just exited the NoMa-Gallaudet U station at midnight when they were pursued by three men.

“Jack had noticed we were being followed and he didn’t realize they had any weapons,” Shoopman said. “He turned around to throw a punch and as he was turning around, a gun was pointed to his face and the man said ‘drop your wallets, drop everything.’ ”

According to DC police, Shoopman and Onoforio threw their wallets on the sidewalk, away from the suspects. The situation escalated when the man with a knife demanded the two hand over their phones.

“I really wasn’t that scared until they said ‘we’ll just grab the girl instead’ because then that’s when I really felt threatened,” Shoopman said.

After a dispute between the suspect brandishing the gun and another wielding a knife, Shoopman and Onoforio fled.

“The second he pointed the gun away, I grabbed Amanda and ran,” Onoforio said. “In the back of my mind, I thought ‘there was no way this guy is going to shoot me over a cellphone.’”

No arrests have been made in connection with the incident.

“The Washington Center takes the safety and security of our participants very seriously,” said Kevin W. Nunley, vice-president of student affairs at The Washington Center. “We will continue to orient our students to the best practices in safety and security in an urban environment as well as reminding students to follow the protocols set by their individual academic institutions.”

Members of the seminar listened to speakers and took tours of government facilities and monuments while in Washington D.C.

“We believe in the safety of all students,” said Pascale Charlot, dean of the Honors College at MDC. “The incident that occurred was troubling and we immediately reached out to the student involved and provided her with counseling.”

According to Charlot, the College will be taking a holistic approach when determining how to handle future events sponsored by MDC. She did not rule out future participation in The Washington Center programs but the incident will be considered when evaluating the quality of the program.

This was not Shoopman’s first time in Washington D.C. She spent last summer interning for the Fund for American Studies.

Shoopman, a 19-year-old sophomore studying environmental science, also volunteers with the National Parks Service in the Everglades and the Live Like Bella Foundation—an organization that resonates with her because she is a pediatric cancer survivor— where she received the Volunteer of The Year Award in 2015.

In 2017, Shoopman was tabbed as Miss Homestead. The title came with a scholarship that covered her first semester at MDC.