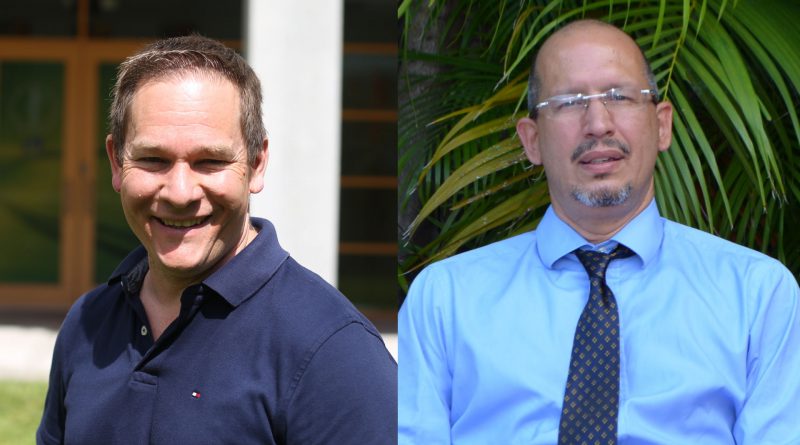 Two Homestead Campus professors, Eduardo Araujo-Pradere and James Ley, have started a research project that allows undergraduate students in their astronomy, physics and chemistry classes to participate in astronomical research.

Their course, What is Light Telling Us? Spectral Analysis of Astronomical Objects: An Interdisciplinary Project, will cover the fundamental ways that astronomers are able to learn about distant stars by evaluating qualities of the light they emit.

“Looking at the wavelengths of light coming from stars, nebulae and star clusters, we can infer the distances, temperatures and their chemical makeup,” Ley said.

The project, the first of its kind at Miami Dade College, was one of the seven awarded a $10,000 grant by the President’s Innovation Fund, which was created by the College last fall. The program aims to provide students with innovative and transformative learning experiences.

Ley and Araujo-Pradere are treating the project as a way to show the College that hands-on research has a positive impact on students.

At the moment, only Ley and Araujo-Pradere’s students can take part in the research. They aim to convince MDC to establish other similar projects.

Margaret Shippey, who is the coordinator of the grant and who also serves on its review committee, said that MDC supports the exploration of new instructional strategies and hopes to engage students to learn in new ways.

“[Professor Araujo-Pradere and Ley’s] teaching approach makes course content come to life for students. Concepts and theory all of a sudden have relevance and application in the real world,” Shippey said. “Our students deserve the opportunity to have real laboratory experiences.”

Araujo-Pradere, an assistant professor of physics and astronomy, said the project is groundbreaking at the community college level and that the students will remain independent throughout their research.

“They will be handling telescopes and a special camera to take pictures of the stars,” he said. “That’s very sophisticated.”

Students involved will also run demonstrations open to other students and community members who are interested in exploring the world of astronomy.

The professors said that they had been discussing a project like this one for some time and that the creation of the new fund made it possible.

“When the application [opening] was announced, we saw an opportunity to execute our plans,” Araujo-Pradere said.

According to Ley, part of the inspiration of the project was to create more research opportunities for students. While the college offers other opportunities outside of class for undergraduate science research, they are typically very competitive, and first-year students and non-science majors have less of a chance to participate in them.

Ley and Araujo-Pradere strongly believe hands-on research is beneficial to students. They say it allows them to apply what they learn in the classroom, motivates them and increases their interest in the subject.

“It was really nice to see them so deeply involved in what they were doing,” Araujo-Pradere said. “That’s a really good thing.”