New Additions: Homestead Campus will repurpose a land purchased back in 2011 as a new parking lot. The project is currently in the design phase.
JAYNELL PERERA \ THE REPORTER
News
February 10, 2017February 28, 2017 Maria Vizcaino Homestead Campus, Parking

Homestead Campus administrators said they are in the “design phase” of an expansion project that is expected to alleviate a shortage of parking.

The total budget for the parking lot is $3.2 million, according to Homestead Campus director of campus administration Tania Acosta.

“The campus currently does not have sufficient paved and striped parking in the east and west parking lots. As a result, the campus have been utilizing an unpaved section of the Flagler lot for overflow traffic,” said Homestead Campus President Jeanne Jacobs.

The project will utilize land the College acquired in June of 2011. That land is four parcels, which total about 5.1 acres at North Flagler Avenue. The cost was $2.7 million. The land, referred to as the Flagler Lot, is located east of the existing student parking lots.

“The new lot will provide sufficient and accessible parking for our students and visitors,” Acosta said. “It also will make the campus more visible and accessible to those traveling from various directions.”

Currently, the Homestead Campus has 504 parking spaces in lots 1, 2, 3 and 4. So far, the campus has registered 2,529 parking decals for this school year.

“It will include a guard booth for public safety, blue phones, access control devices at gating, signage, exterior lighting, irrigation, landscaping and two marquees monument signs on the corners of Flagler,” Jacobs said.

The repurposing of the area purchased by the College will take approximately six months. No date has been set by the campus’ administration to start the process.

“Parking, I think has been always an issue,” said Alexander Soto, the Student Government Association president at Homestead Campus. “For my campus it’s not terrible; compared to Kendall or bigger campuses, it’s not that bad.”

The Homestead Campus administration is also working toward adding a new building within the next five years.

In July of 2016, a resolution of the Community Redevelopment Agency Board of the City of Homestead approved an option and a development agreement for conveyance of real property to Miami Dade College for educational use. There was no cost associated with this agreement, according to Jacobs.

The College will have two years to enter into the agreement with plans to construct a new building.

Once the transfer process of property from the City to the College is finalized, then the planning and design phases, and approval process will begin. The plans for the building, which is expected to be built as brand new, are to relocate service departments, an entrepreneurial education center and add classrooms. The building is expected to have at least three floors. 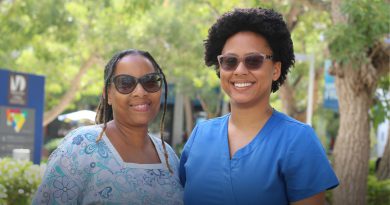 Mother And Daughter Take Classes Together At Homestead Campus