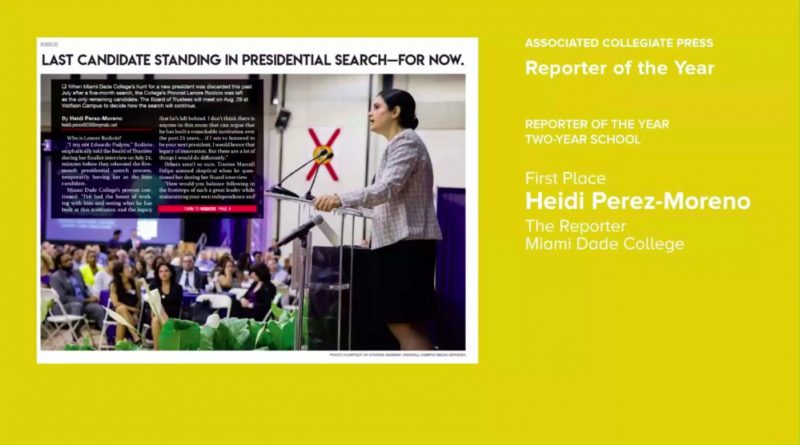 Heidi Perez-Moreno, who served as editor-in-chief of The Reporter last year, was named the Associated Collegiate Press’ Reporter of the Year in the two-year colleges category.

Winners were announced virtually on Oct. 22 during the Fall National College Media Convention.

“I’m truly humbled and honored to be recognized for my work at The Reporter,” Perez-Moreno said. “This wouldn’t have been possible without such a wonderful staff that helped me cover Miami Dade College last year.”

Perez-Moreno was selected Reporter of the Year based on a string of stories she wrote about the College’s ongoing Presidential search and an obituary on a beloved math lab manager at North Campus.

She led the paper through its coverage of the coronavirus pandemic and started the publication’s  bi-weekly newsletter in April.

Last month, she was selected as a College Media Association Pinnacle Awards finalist in the Best Breaking News Story category for a story she co-wrote about the Board of Trustees’ decision to reboot the College’s presidential search in July of 2019.

Winners for that award will be announced Oct. 23 at the ACP/CMA Fall National College Media Convention that is being held virtually this year.

A year ago, Perez-Moreno was selected to participate in The Chronicle of Higher Education’s 2019 Fall Reporting Workshop. The two-day project took place in Washington, D.C. and taught students how to cover higher education and navigate public records.

Perez-Moreno, 20, is now a junior at the University of North Carolina at Chapel Hill. She is a staff writer for The Daily Tar Heel, the independent student newspaper at UNC. 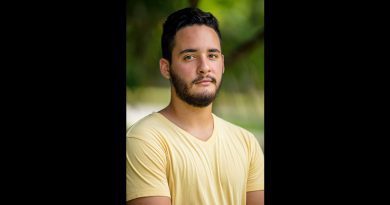 Former Multimedia Editor For The Reporter Hired By Univision