Crystal Esparza, who served as the A/E editor for The Reporter this past year, recently completed an internship in January on the HBO series Ballers.

Esparza, 22, was selected as a production assistant intern in the locations department. She was picked among more than 100 applicants.

“The experience has been great,” Esparza said. “It’s a lot of work. I’ve been doing a lot more than a regular locations production assistant would be doing. I’ve gotten to make a good impression and in the future, when they need a crew member, hopefully I’ll get a call. The crew has been very welcoming and informative. They are awesome.”

Esparza is scheduled to graduate from Miami Dade College in May with a bachelor of applied science degree in Film, Television & Digital Production.

She has produced various short films, including an adventure comedy, an art house film and a drama. In 2014, Esparza worked as a line producer for respected Cuban American director Leon Ichaso for his film La Ultima Noche. 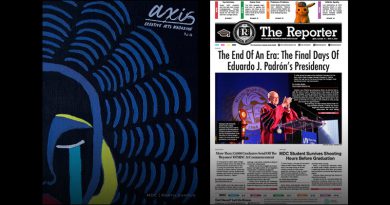