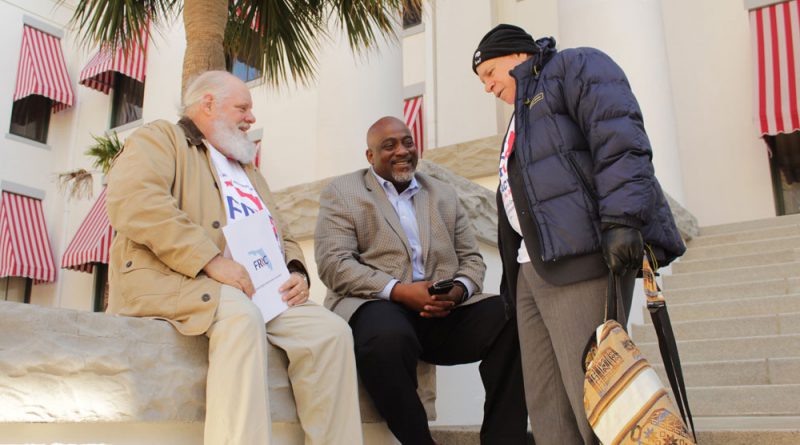 Roadblock: Pictured is Desmond Meade (center), a Miami Dade College alum who fought through homelessness to attain his degree following a drug conviction, outside the Capitol in Tallahassee in 2018. Despite Amendment 4’s passage in 2018, the Florida Supreme Court ruled earlier this month that felons must pay all fines related to their case before they can vote again.
PHOTO COURTESY OF XAVIER MCCLEARY
News
January 24, 2020May 28, 2020 Heidi Perez amendment 4, court, florida supreme court, voting rights

More than a year after Florida restored voting rights to convicted felons who have completed their sentence, the Florida Supreme Court sided with legislation that says they must pay all court-ordered fees before that can happen.

The court’s decision on Jan. 16 could affect the voting rights of nearly 1.4 million people with felony backgrounds living in Florida, according to the Florida Rights Restoration Coalition.

Governor Ron DeSantis praised the court’s response via Twitter the same day, arguing that fees should be paid to the felon’s victims.

“Voting is a privilege that should not be taken lightly, and I am obligated to faithfully implement Amendment 4 as it is defined,” DeSantis tweeted.

Amendment 4 passed as a ballot initiative in 2018. It restored the voting rights to people with felony convictions that have completed their sentences, except for citizens charged with a murder or sexual offense.

In response, Florida passed two bills last July—SB 7086 and HB 7089—that state voting rights can’t be restored until citizens pay all court-ordered fees, fines and restitutions related to their sentence. The bills contain language that stipulates felons can’t receive their voting rights until completing “all terms of a sentence.”

As a result, DeSantis asked the Florida Supreme Court to interpret the clause to see whether it extends to any financial obligations, according to court documents.

“We should all be concerned by Governor Ron DeSantis’ efforts to manipulate and engineer a result that attempts to eliminate the voting rights of hundreds of thousands of Floridians,” said the American Civil Liberties Union of Florida in a statement on Jan. 16.

Desmond Meade, a Miami Dade College alum who championed Amendment 4 in 2018, said in a statement the Florida Rights Restoration Coalition will continue to help people with felony convictions pay their financial obligations. Meade earned his associate’s degree from MDC and a law degree from Florida International University while fighting through homelessness following a drug conviction over a decade ago.

“We have remained consistent about what completion of sentence means, and because we have always kept people at the center of our work,” Meade said in a statement to the FRRC on Jan. 16. “We diligently worked with the Florida legislature, local judicial circuits and our fellow citizens to develop pathways for people with financial obligations to complete their sentence.”

Several organizations like the ACLU, Campaign Legal Center and the Southern Poverty Law Center have retaliated with a federal lawsuit against SB 7086. They claim it is unconstitutional because it hinders lower-income citizens, who often can’t afford the fees, from voting.

The ACLU said the court ruling will not affect the ongoing suit because they did not “determine when all terms of sentence are complete.”

“The Florida Legislature cannot ignore U.S. constitutional protections when interpreting when a sentence is completed for the purpose of restoring voting rights,” said the ACLU in a statement. “If it does, we are confident the federal courts will correct it.” 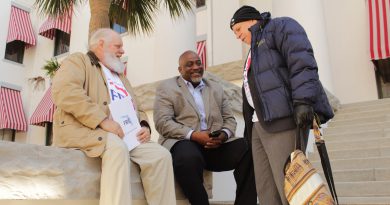