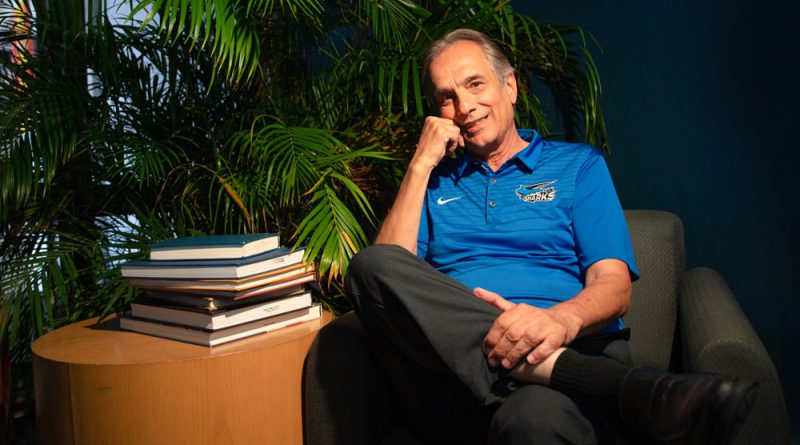 A home crowd’s vivacious roars filled the arena. Anthony Fiorenza had experienced this hundreds of times before.

But this time, the uproar was for him.

On Sept. 17., before a Lady Sharks volleyball game versus Palm Beach State College, the spotlight was on Fiorenza⁠—Miami Dade College’s long-time athletic director⁠—as he was called onto the court.

The pomp and circumstance was part of a tribute celebrating Fiorenza’s last day on the job. He retired from MDC after 33 years at the institution. The 66-year-old spent the last nine overseeing the College’s five-team athletic program.

“He is a person with vast experience after working for 33 years at this school,” said Lady Sharks head coach Origenes “Kiko” Benoit. “He was really good helping the student athletes with their classes or any other type of situation. He knew a lot of people in the school and was really helpful for us.”

“The last couple weeks, once everything started to come to a halt and he was starting to clean up his office, you can see that he was a little upset that he’d be leaving,” said Alysia Dyer, who will take Fiorenza’s place until a permanent replacement is found. “He doesn’t know about, you know, the life of not having to go to work yet…I guess the world of the uncertain, you know, kind of scared him a little bit.”

A child of Italian immigrants, soccer was always in his blood. Fiorenza’s father and uncle, both from Calabria, played soccer with him when he was a child. They often took him to games in New York and Italy.

Eventually, he attended Mount Vernon High School in New York, and played on the school’s team. He later played for Westchester Community College’s soccer team. In 1974, he received a scholarship to Florida International University where he was the team’s goalkeeper until 1976.

Upon receiving his bachelor’s degree in social work, he returned to Westchester Community College in 1977. He worked as a men’s and women’s basketball coach and facilities manager until 1980.

In 1985, Fiorenza returned to Miami. He got his start at MDC as director of intramurals, overseeing recreational sports on a part-time basis.

He earned his master’s degree in physical education and administration from Nova Southeastern University in 1988. Fiorenza was promoted to assistant director of Student Activities, now called Student Life, at Kendall Campus in 1990. Three years later, he was as director of the department, overseeing clubs, blood drives and activities.

Fiorenza was promoted to his most recent position, director of athletics, in 2010. He assumed the role while still serving as Student Life director at Kendall Campus. He served in the dual role for six months. The stress of two full-time positions forced him to spend many late nights at the office. Sometimes he didn’t leave the office until 9 p.m.

In time, the athletic department became his stomping ground. He was known for walking throughout the office, closing every door that was open.

“I never asked him why,” Dyer said. “It would drive me nuts. If I left the office, maybe to go back to the gym and come back up, I came back and my door would be closed. I’d be like ‘Oh it must be Tony because he just closes his doors.”

The small office became his second home. It’s where he regularly spoke with athletes and worked with coaches and administration on athletic projects.

“My proudest moment is that my kids graduated college,” Fiorenza said. “I was excited for them. They’ve reached part of their goals…It’s like being a parent and watching your kids grow.”

When he began cleaning out his office weeks ago, the hardest part was packing up photos of colleagues and athletes that he’s worked with. He’ll likely hang the pictures in his house or save them in a scrapbook.

He said he will miss his time at the College. Fiorenza often picked up stray trash around the fields and courts before and after games he attended. Sometimes he practiced his Italian with MDC athletes native to the country.

Fiorenza hasn’t made plans for retirement, but hopes to spend more time with his children and grandchildren. He also hopes to visit his family in Italy in the near future.

Many colleagues and athletes have brought him gifts, such as watches and gift cards. The athletic department’s staff plans to give him a trophy featuring pictures of Fiorenza during his tenure at MDC.

“It probably won’t hit me for a while,” Fiorenza said a few days after his retirement was announced. “It’s hard for me to explain it right now. I’m not working but, you know, the last two days have been like I’m on vacation.”