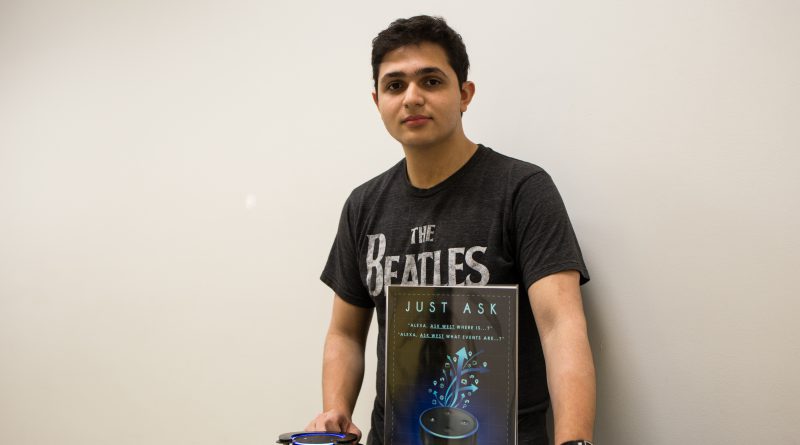 Andres Gutierrez stands in the main rotunda at West Campus, hovering over a black plastic-top desk where an Amazon Echo Dot sits next to a sign that reads: Alexa, ask West.

And Alexa comes to life.

“Testing is in Room 2110, which is down the hall on your right, passed the Admissions Center,” Alexa responds.

The new technology was developed and programmed by Gutierrez, 18, in partnership with West Campus Network and Media Services, to make the campus easier to navigate and more accessible for new students.

“One of the influences for me to be involved in this project was what I felt when I first started at West Campus,” said Gutierrez, a School for Advanced Studies senior. “It took me a long time to get around. I was always lost.”

That’s where Alexa comes in.

Programed in Node.js, a version of the programming software JavaScript, Alexa’s knowledge of West Campus ranges from events, locations, department hours of operation and general information about the campus and its administration. The project was originally approved by former West Campus President Roger Ramsammy last school year.

Gutierrez, a computer science major, first started the project in February 2017 while doing an internship with West Campus Network and Media Services. The department’s manager, Pedro Santos, wanted to create technology that helps the student body.

The duo brainstormed various ideas before they settled on reprogramming an Alexa Echo Dot.

“I would call Andres at night and in the summer just to talk about the Alexa,” Santos said. “That’s how passionate we were about this project.”

Gutierrez got to personalize a regular off-the-shelf Alexa by instilling it with a skill, a program designed to know information and have pre-programmed answers through lines of coding.

“Because of Andres, the program was built,” Santos said. “He’s very hands-on. If you give him a problem, he works tirelessly to solve it.”

The hardwork has paid off; response to the gadget has been positive.

A live demo was done to launch the Alexa during the Coffee With the President event, where the campus president and faculty meet students over coffee and some light food. They also presented it to the chief innovation officer for MDC, Damian Thorman, when he visited West Campus.

To interact with Alexa, all campus visitors have to say is: “Alexa, ask West…,” followed by their question.

“They’re fascinated,” Gutierrez said. “They’re very curious and try to talk to the Alexa just to hear it reply.”

Students aren’t the only ones who are impressed.

The project also got Gutierrez recognition from Amazon. They sent him a T-shirt as a gift. The shirt has a technologically deconstructed Amazon Echo Dot on the front and the phrase “Amazon Alexa // Developer” on the back.

“I got it in the mail and for someone that isn’t super involved in voice technology, it’s just a cool reward for the work we’ve done,” Gutierrez said.

Gutierrez, who hopes to attend Massachusetts Institute of Technology next fall, already has a successor on board to take over the project when he graduates in May.

The anxious understudy is Andres Mota, a West Campus Network and Media Services employee who has been with the department since September 2017.

“I’m super nervous, but in a good way,” Mota said. “It’s going to be my first professional project and I’m eager to start.”
The trio meets on a weekly basis and continues to develop and refine Alexa’s skills. Eventually, they hope to increase the amount of Alexas at West Campus to three and expand the project to other campuses.

“The project is definitely still in its infancy,” Gutierrez said. “It’s new technology, but it’s nice we all had a part in it.”

Alexa can be found in the main rotunda on the first floor at Miami Dade College West Campus. For information on how to get involved, email Pedro Santos at psantosa@mdc.edu

MDC Students Aspire To Help Others With MADE At The Citadel

Electric Cars: How Close Are They?

SAS Senior Gives Back To Education